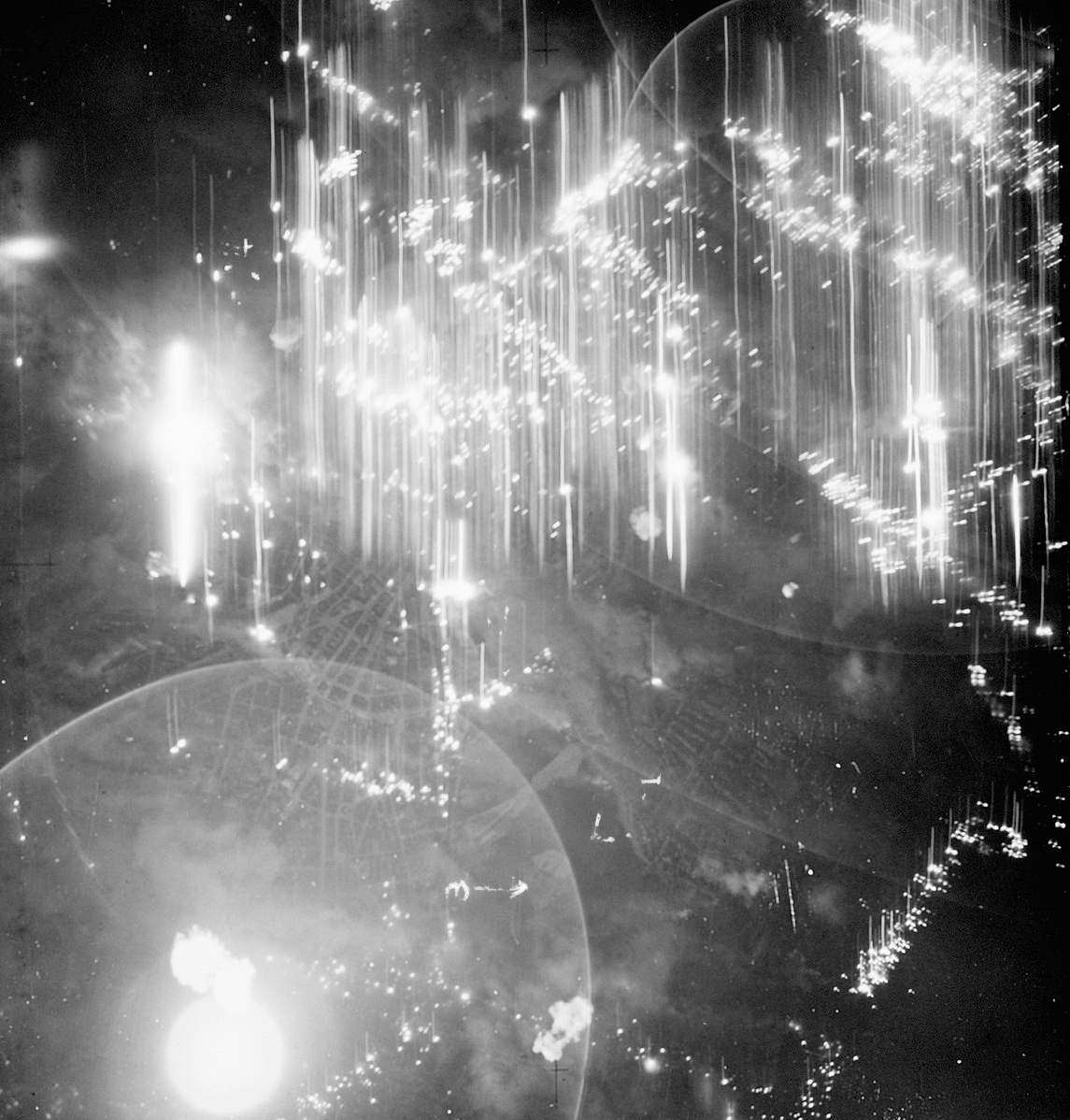 It was pretty cold. I had put on the whole rigmarole: flying suit, fleece-lined boots, sweater, parachute harness and Mae Mest. Things were very quiet. There was no sensation of being part of an air armada waiting to take off. It was 1640 hrs when the Pilot said: “Well, better be getting in.” The engines at 1650 hrs and the pilot started going through the checks with the engineer. I stood behind them in the gangway where the bomb aimer, John Bell, was reclining.

Distant flashes and searchlight cones began to be visible. The aircraft broke into an odd swaying motion. As we drew nearer land, the whole horizon was punctuated by signs of strife. These activities were forbiddingly widespread.

“That’s right – run right into it,” said the engineer sarcastically.

As we approached Frankfurt, you could see clusters of searchlights, the flares, the fires and the flashes. It was quite unlike what I expected. Everything was so neatly beautiful.

“Hello, Bob. Junkers 88 coming up, starboard,” said the rear-gunner in an urgent voice. Knights threw the aircraft over to allow the gunners to get a better view.

“No, O.K., sorry, it’s a Lanc,” he continued. It came towards us in a sideways motion. One second a vague shape, it alarmingly materialised and defined its outline. There seemed no possibility of avoiding a collision. It was all over in a second, but it seemed like quite a time. I looked and its underbelly skimmed over us. 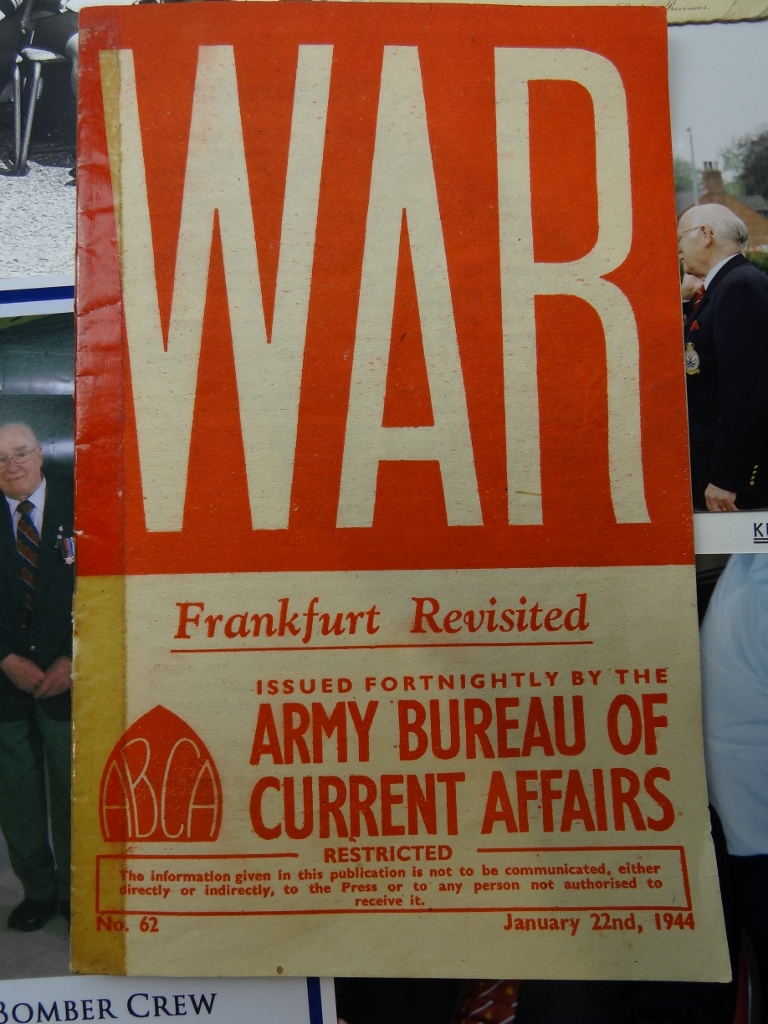 “Jesus, did you see that?” said Knights.

“I thought we’d had it that time,” said the engineer.

We were now coming up to Frankfurt proper. You could see what looked like hundreds of thousands of electric lightbulbs carpeting the ground. It took me some time to realise that these were incendiaries. The sky was suddenly filled with regular grey puffs of flak barrage. They continue with what seems like unlimited regularity. With the flares dropped by the Pathfinders, the flares dropped by the enemy fighters, the waving searchlights and flashes of gunfire, there is a sense of supreme excitement.

Knights was working to keep us out of the clutches of the searchlights and away to the right another aircraft had failed to keep out of the way. You could see it wriggling in the cone whilst the anti-aircraft concentrated on it. The cruel thing is that one’s only sensation is one of relief that the searchlights are temporarily diverted elsewhere. You can do nothing for the unfortunate aircraft that is cornered. There is complete unity within the individual aircraft, but for some reason that seems to be the limit of one’s horizon.

Do they just drop the bombs anywhere

The first time over the target, conditions weren’t satisfactory. We couldn’t see the pathfinding flares, so we flew across the city, then circled around and approached from the opposite direction to the main stream of bombers. I hadn’t allowed for the sense of detachment produced by being 20,000 feet high. You knew that down there was a town of half a million people. I could see John Bell, the bomb aimer, preparing to press the button which would 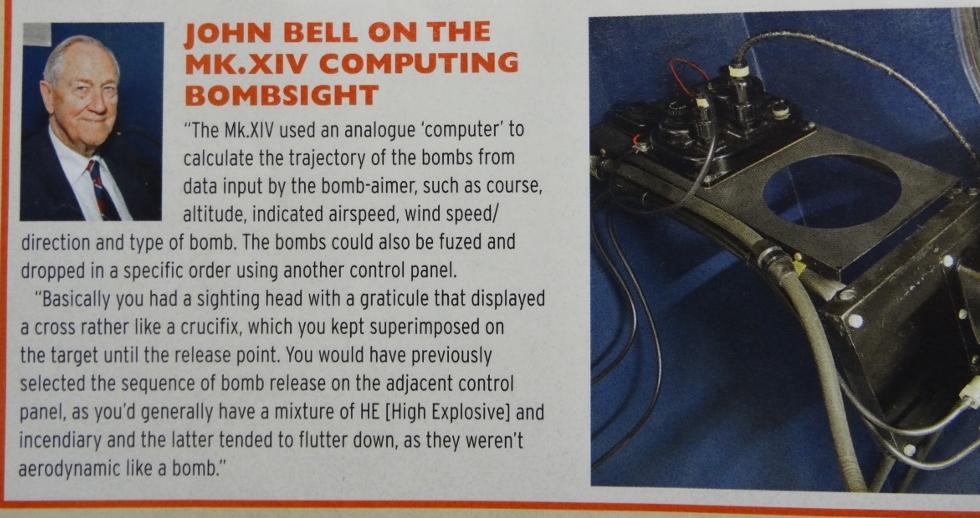 release another 4000 lbs on to the town. He dropped incendiaries first and then the 4000 lb cookie. The pilot kept the aircraft flying as level as possible for the bombing run. He rose from his seat as if he was willing the aircraft to a supreme effort. I tried to write down the dialogue between pilot and bomb aimer, but it was too fast for my hobbling shorthand. I wrote it down, but now I can’t transcribe it.

Knights asked Bell if he thought they had an accurate picture. The bomb aimer was satisfied enough to deliver the bomb. There was a sense of relief and achievement. The engineer pointed out the burning streets of Frankfurt appearing as an orange streak of carpet. I tried to think of the spectacle in terms of what was going on 20,000 feet below, but it was just impossible to worry about. Mostly, I suppose, because we had plenty to worry about above. The sky was simply full of trouble.

Were many shot down? 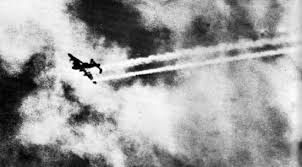 Plenty seemed to have bought it. The tail gunner had reported fighter flares and an engagement going on behind us to starboard. This and the one we saw just after crossing the coast were the only two aircraft we actually saw going down, though later we learned that 42 aircraft had been lost that night.