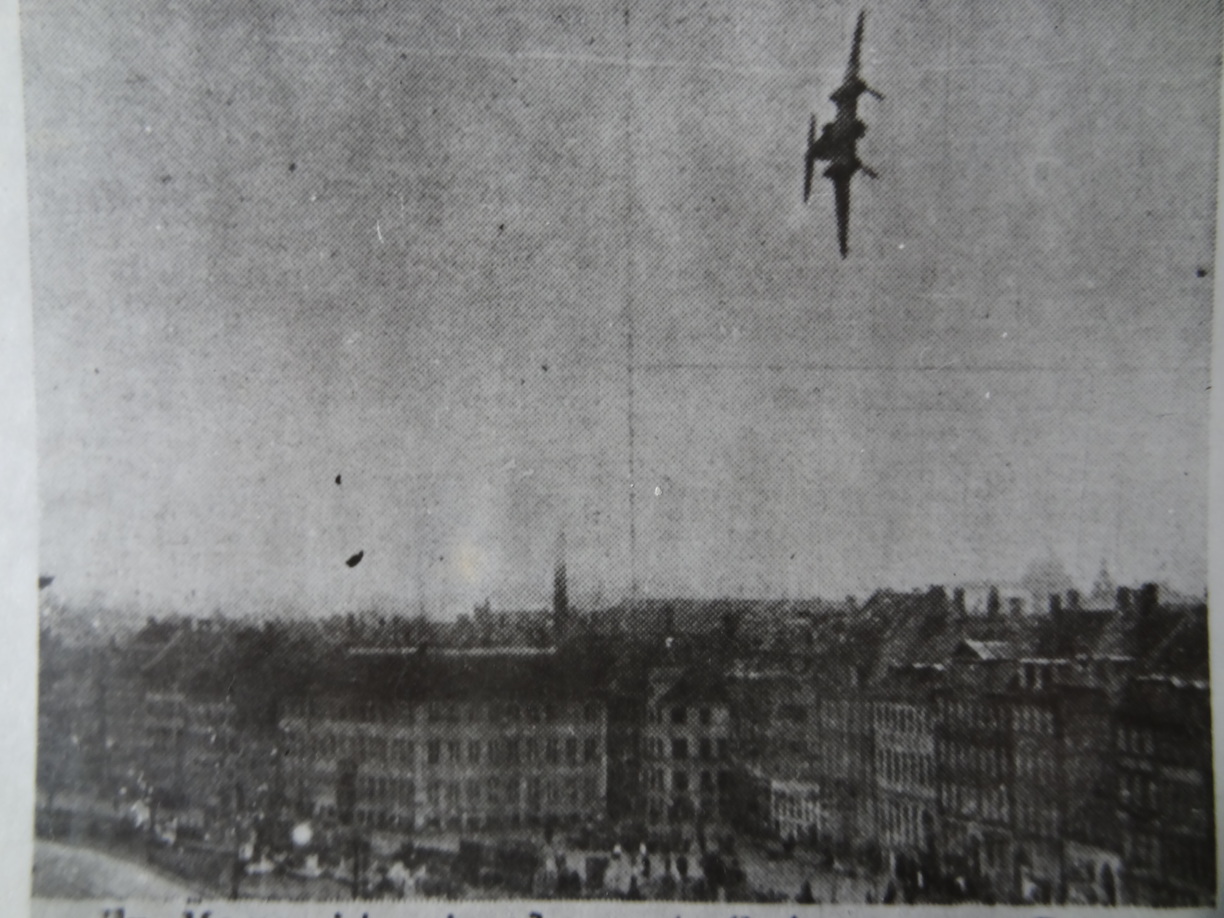 On Halloween 1944, British Special Operations Executive and the American Office of Strategic Services put into action the daring Danish raid on the Gestapo HQ at Aarhus University. They had discovered that the Gestapo were planning to execute, after trial, members of the Danish Resistance and needed to act swiftly to liberate a number of captured resistance fighters. The Gestapo HQ was flanked on both sides by civilian hospitals, so the master of the precision attack, the de Havilland Mosquito, was selected to hit the target at low-level. “Destroy the building – and the incriminating documents with it” were the order of the attacking force. It was reported that pilots were hand-picked by Winston Churchill himself, such was the importance of the mission.

Sydney Clayton’s Mosquito was the ninth aircraft in wave, turning in towards the building. Smoke was already rising from bombs dropped, obscuring his view. Anti-aircraft guns were opening up; their crews now fully awake to what was happening . He cut into the turbulent, smoke-filled air rising from the roof tops. Sydney’s thumb tightened on the bomb release and released four 500 lbs bombs direct at the target. The illegal Danish press estimated that 150 to 200 Gestapo members, including a large number of SS Officers, and some 30 Danes perished in the attack. Sydney came through it without a scratch but freely admitted:

“It was frightening to be on low-level raids – anybody who says it wasn’t is lying.” 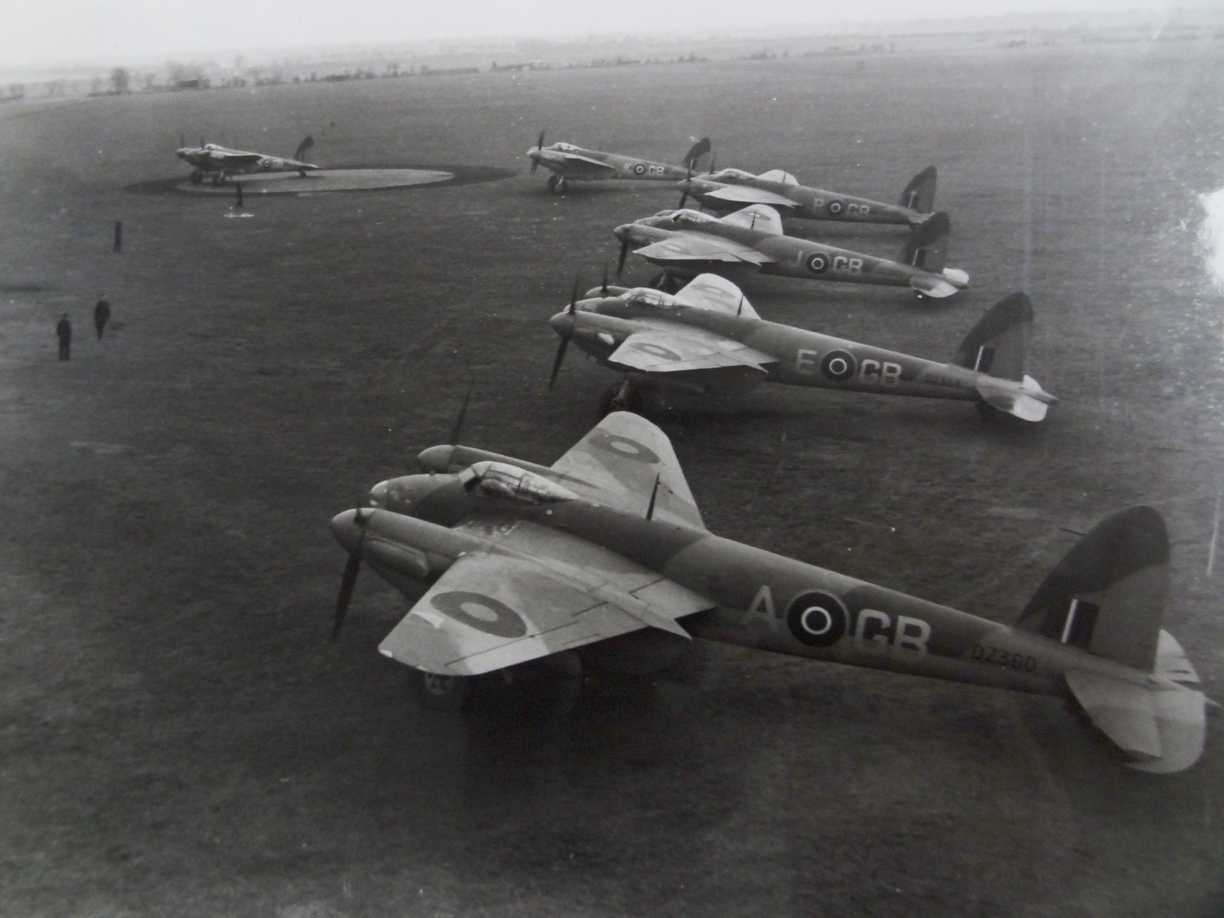 Sydney Clayton was born in March 1916 and lived in Longridge, Lancashire where he worked selling cheese as a commercial traveller for a local company before signing up for the RAF in May 1939. Although ambitious to be a pilot, training was oversubscribed so he turned his talents to training as a navigator. Qualifying in 1940, his first operational unit was with 107 Squadron flying in Blenheim light bombers, mainly on daylight raids. In total Clayton flew 72 operational sorties in the Blenheims, resulting in the awarding of a Distinguished Flying Medal in spring 1941 for completing 60 sorties and promotion to flying officer. With the Bleinheims top speed not exceeding 210 mph, as opposed to the Mosquitoes 300mph, scarily, raids were even more hazardous:

“We were going in at low level at low speed – it was not unusual for 12 aircraft to go out and for only two to return.”

It was on one such raid that Clayton’s best friend ‘Titch’ Brown, who operated as mid upper gunner in the same Bleinheim, was hit in the head by flak.

“He was very badly injured. I did all I could for him, but he died later in hospital.”

With the formation of the first De Havilland Mosquito squadrons in early 1942, Clayton returned to active duty with 105 Squadron, resuming the golden partnership with Roy Ralston. Their first operational flight was on July 11, 1942, with a low-level bombing raid on the submarine base at Flensburg. Badly damaged by flak, the plane was forced to ‘belly land’ at 160mph on its return.

On October 21, 1942, while crossing the Dutch coast, Clayton’s Mosquito was attacked by two German Focke Wulf 190s. Following a 15-minute encounter the Mosquito escaped, and for his role as navigator in this encounter Clayton was awarded the Distinguished Flying Cross:

“While crossing the north Dutch coast we were jumped by two Focke Wulf Fw 190s who had been vectored onto us. On breaking cloud cover we gained some distance, but the Fw 190s were being controlled and turned onto us. However, with our dive we managed to hold them off although thtey chased us for about 15 minutes. Being more or less at sea level and going flat out, it was a very bumpy ride, with my head vibrating between radio and canopy. Luckily the 190s broke away and we could then make for base.”

Missions to the rail sheds and stations at Lier, Montgen, Berman, Raimses, Liege and Rennes were interspersed with the attacks on Hengelo Diesel factory, Liege steel works and the Le Mans Renault Aero works. On 9 Dec 1942, a sortie to Northern France was made famous when the pairing trapped a German train in a tunnel near Soissons, Paris. A repeat sortie to Hengelo on 20 Jan 1943 proved near-fatal. Their Mosquito was hit by flak on the outward leg but still seemed flyable, so they pressed on and bombed their target. However, with no air speed indicator available, the return to base resulted in another hazardous belly-landing.

Then, on 1 Apr 1943, a low-level raid on the Trier railway engine repair depot was to be Clayton's 100th operational sortie breaking the R.A.F. record for number of operational missions. It was also to be his last as a navigator, as he was to fly a further 46 sorties as a Mosquito Pilot. The Trier mission was to make the headlines in virtually every British newspaper. Sydney navigated the Mosquito along the double rail track and Sqn. Ldr. Ralston directed a bomb to skid right into the tunnel’s mouth. As a train had entered the tunnel only moments before, they then flew straight to the opposite entrance, dropping another bomb with a direct hit to seal the train in the tunnel.

“I watched Roy’s thumb on the bomb release tit as the sheds came steadily towards us…he sat dead still…then suddenly his thumb jerked once and he laughed. The bomb, with a delayed action fuse, actually went inside the tunnel. It bounced on for over half a mile before it exploded – completely blocking the tunnel with the train in it.”

Wing Commander Hughie Edwards, V.C. was taken aback by their daring as they dived in front of him, skimming the building rooftops within a few feet of one hangar with one engine out.

Clayton’s crowning glory came on 31 Oct 1944, in the ‘Daylight Circus’ raid on the Gestapo Headquarters in Aarhus, Copenhagen, in support of the Danish Resistance. For this, and for the famed raid of the Gestapo Headquarters at Odense on 17 Apr 1945, Clayton received a pair of ‘royal’ cufflinks from the resistance and a bar to the D.F.C., finishing with 146 sorties, elevating him to one of the most prolific British airmen of WWII. Hughie Edwards, V.C. eulogised Clayton with: "There are mighty few people who would have possessed the courage to go on facing the enemy and keep the same spirit as you have done. I am proud to known you and honoured to have been your commanding officer." 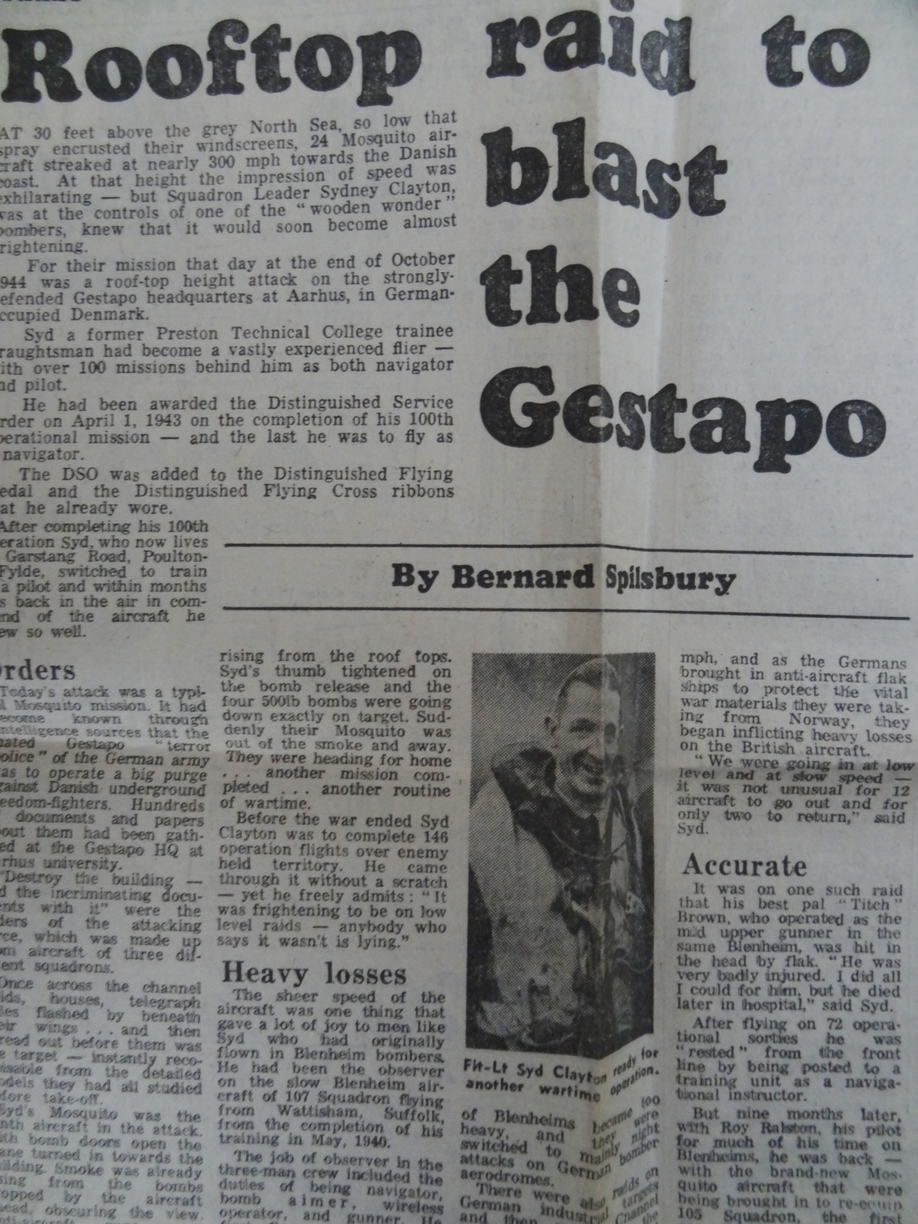 One of Sydney’s last ‘Gestapo-Hunter’ missions was the raid to the HQ at Odense. Known to the locals as 'Torture Castle' the Husmandsskolen was surrounded by barbed wire fences and strict surveillance was enforced. Having been taught a painful but valuable lesson by the raid at Aarhus, the Husmandsskolen had been thoroughly disguised from enemy aircraft by camouflage netting. Six Mosquitoes were led by Group Captain Bob Bateson and the Wing Tactical Navigation leader, Squadron Leader Ted Sismore, who had successfully planned and participated in the Shell house raid and had used his considerable talent to plan this particular raid. Amongst the aircrew was Air Vice Marshall Basil Embry, using the pseudonym 'Wing Commander Smith', as he had done previously when, against orders, he flew on two previous raids against the Gestapo in Denmark.

The air raid sirens in Odense began to sound alerting everyone that enemy bombers were heading towards the city. Although the navigation was spot on, the target was very difficult to find because of the effectiveness of the camouflage. As a result, the attackers had to circle the area for almost 30 minutes before the target was finally identified and three bombing runs had to be made. Two thirds of the main buildings were completely demolished and the remainder gutted. What were once living quarters had also been destroyed and some of the outlying buildings were severely damaged. 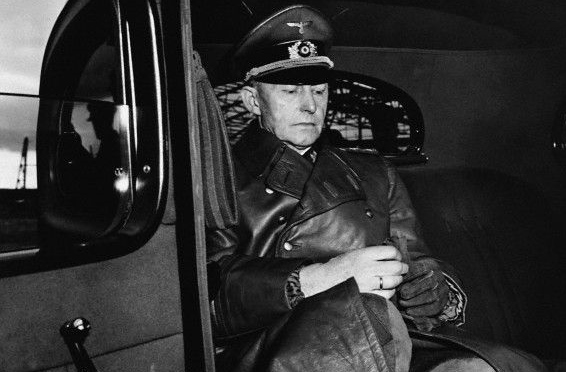 The Gestapo did not have long to find an alternative building to hold their prisoners as German forces in Denmark surrendered to the British on 5 May and on the morning 7 May 1945, the German General Alfred Jodl signed an unconditional surrender document officially ceasing military operations in Europe the next day. Sydney Clayton then flew General Jodl personally to Berlin at the request of Mashall Zhukov. Clayton landed at Templehof, where the captive Jodl was handed over. The aircraft was serviced by the Russians and Clayton became one of the first British troops to set foot in Berlin after Victory in Europe was declared. The next morning he was ordered to fly to Lubeck as patrol for the convoy in which Crown Prince Olaf of Norway was returning to Oslo. Colonel General Alfred Jodl, meanwhile, was placed in a concentration camp after a further surrender document had been signed to the Russians. He was accused of war crimes at the Nuremberg Trials, for giving the order of executing prisoners of war, and the order to deport Norwegian and Danish citizens to concentration camps. He was found guilty, sentenced to death and hanged on 16 Oct 1946.