Sisters In Arms: The Gruesome Reality of WWI Nursing

"Dear Mrs Ellis, I very much regret to confirm the sad news of the death of your son, Pte. William Ellis, RAF Kite Balloon Section. He was admitted two days ago suffering from heart affection. He was not complaining at all and seemed very well and comfortable. This afternoon he complained of a sharp pain at his heart. The Medical Officer saw him and ordered some remedies, but he grew rapidly worse and died quite suddenly at 6pm. He did not suffer long and died very peacefully. He left no message and spoke of no one at home. His personal effects will be sent to you later through the War Office. With very sincere sympathy, Yours truly, H.M. Fergusson. Sister."

Sister Helen Mary Fergusson was the nurse in charge of 47 Casualty Clearing Station, which had to be evacuated on the third day of the German Spring Offensive on 24 Mar 1918, with Miss Fergusson herself being evacuated to the Rouen area. In most cases Clearing Hospitals were housed in buildings such as schools or seminaries, and often only a little better off for equipment than a dressing station. There were no beds, but stretchers and blankets and the Sisters usually worked past midnight, who described the condition at Hazebrouck, for instance, as ‘terrible’. Admissions were incessant and often the patients could only be fed and have their wounds dressed and their feet bathed. Only the most urgent operations were undertaken as the number of Sisters was hopelessly inadequate – often five or so to 1200 to 1500 patients admitted in just 24 hours. 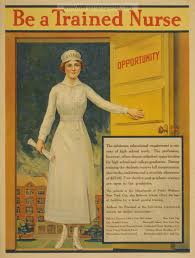 The following extract is from George Smith, who served in the Royal Army Medical Corps, on the day prior to the evacuation, on 23.3.1918:

“Left 8am for the 5th Army, arriving at HQ at 10am. Saw the DMS, Major General Skinner – found him and his staff extremely anxious. All telephonic communication was entirely cut off and he was in want of both ambulance and train transport, transport of all kinds being a great difficulty owing to all lorries being used for ammunition. He asked me to visit No.41 Stationary Hospital, Gailly, Nos. 32 & 34 CCS [Casualty Clearing Station], Marcelpot, and No. 47 at Rosieres.”

“I got to No.41 Stationary Hospital with very little difficulty and saw the Matron Miss Badger. They were very busy and anxious to get more help. I promised if possible to send reinforcements. From there I went to Marchelpot – had the greatest difficulty in getting along – the roads were absolutely crowded on both sides with troops and transport of every description, retiring. We passed large numbers of Italian, Portuguese and English troops, also large numbers of refugees in all sorts of conveyances as well as on foot.”

“Arrived at Rosieres where 47 CCS was established with a staff of 35 including some anaesthetists and some team Sisters. I saw Colonel Ransome, the OC, and Siter Fergusson, Sister in Charge. They were very busy indeed, having begun taking the day before. During the day they had taken over 1000 and had at the present moment over 1700 patients and had not yet evacuated.”

“I returned to to HQ and had found that the DMS had arranged for ambulances to go to Marchelpot to take the Sisters away and two Ambulance Trains had been arranged. He had taken 6 nurses from 61 CCS which was temporarily attached to 47 CCS to open a rest station at Villers Bretonneux. The OC of 41 CCS said he had been able to take 9 of his staff to Roye, but he did not know where the Sister in Charge and 5 other Sisters had got to. I found out later they had arrived at No.42 Stationary Hospital at Amiens after 24 hours on a refugee train.”