Fighting on Camels with Lawrence of Arabia

Described as ‘one of the more romantic and exciting episodes in the whole of the short-lived history of the Camel Corps’ by officer and author Geoffrey Inchbald, the story of T.E. Lawrence’s attack on the Hejaz Railway combines the sweeping cinematic Panavision of Lawrence of Arabia with the brutal bombastics of War Horse. Only with camels.

Although Field Marshall Edmund Allenby disbanded the main body of the Camel Corps in 1918, Lawrence requested that a detachment of 300 men and camels should be loaned to him for operations beyond the Hejaz railway. Geoffrey Inchbald was an officer serving with the 2nd Battalion Camel Corps – a unit comprising entirely of British troops. In his own words:

“We picked up extra ammunition and large supplies of explosives to take with us and trekked over the southern lobe of the Sinai Peninsula to Akaba where Lawrence came out to meet us to ride the last day in our company, during which he warned us of the kind of greeting we might expect from his Arabs on our joining together. In spite of his warning, we were not quite prepared for what actually happened – thousands were milling around on foot, horse and camel, blazing away with their rifles into the sky in what Lawrence called a ‘feu de joie’, but we thought a shocking waste of small arms ammunition.” 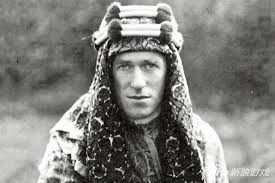 “Lawrence dismounted, flung back his aba, showing his white undergarment and raised his hand. Immediately the firing ceased and the hubbub died down. That night, Lawrence asked Major Buxton for permission to address the men and explain why he had sent for us – a most unusual experience during World War One, as it was only on very rare occasions for a commander to take the troops into his confidence. Illuminated by countless fires, he instilled in us how the Arabs thought we were the bravest soldiers in the world and he begged us to live up to the reputation he had built up for us.”

“The next day we went out to do our first job for Lawrence, which was to capture the Turkish fortress at Mudowra, a station halfway along the railway line between Damascus and Medina. If we could destroy the pumping station, we could put the line out of action for a very long time. We marched out of Akaba with Lawrence at the head of the column with his bodyguard – forty hand-picked Arabs from different tribes, whom we naturally called ‘The Forty Thieves’. On reaching a watering place called Rumm, it took us 30 hours to water our 400 camels. Meanwhile, Lawrence went off with Major Buxton and some other officers to reconnoitre the position of Mudowra, all dressed up as Arabs but with rifles under their cloaks.” 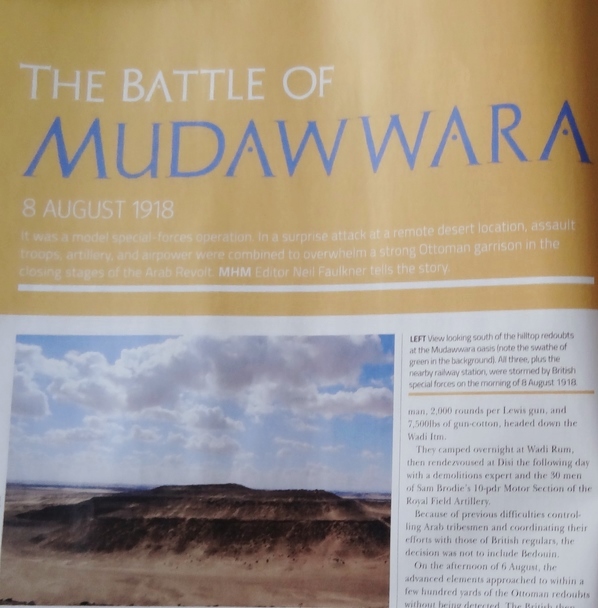 “The attack’s prime objective was to seize Mudowra and destroy the enemy’s valuable water supply. Then the main railway bridge at Kissela was to be blown; finally the rail bridge and wells at Jurf station. The General Staff Operations Order stated that ‘Guides from Jefer to Kissela will be arranged, on his arrival, by Lt. Col. Lawrence. Stress is laid on the value of surprise, the Turks in the Hejaz being hitherto unaccustomed to attack by night.”

“We approached the strongly fortified positions from the rear in complete darkness. The station at Mudowra was covered by three Redoubts and Lieut. W.T Davies of No. 10 Company, who was later awarded the M.C., was to attack and capture the main station buildings and blockhouses. Davies and his party crawled around the stone buildings throwing Mills bombs through the windows before going in with their bayonets. The Turkish trumpeter was shot just as he was raising the instrument to his lips to sound the alarm (the trumpet was taken by Davies as a souvenir and used to call guests to dinner at Camel Corps reunions. One of the casualties sustained by No. 10 Company during the attack was Lieut. J.W. Jones who was killed.”

“Turk prisoners outnumbered ourselves and had to be taken back to Akaba by the Arabs. Lawrence knew perfectly well that, if he paid the Bedouin in advance, they would march the prisoners behind the nearest hill and shoot the lot, so they were paid at the rate of one pound in gold for each prisoner who arrived alive, which they all did. Feisal was so delighted with the victory that he decided to give a special celebration for the Camel Corps at Jefer, where he and Lawrence were waiting to greet them on their return. A large bonfire of brushwood was collected and Feisal, Lawrence and all the British officers took up their positions on rugs and the celebration ‘orgy’ began. I thought of one of those who had just died as he reached hospital after Mudowra – my friend of 10 Company, Corporal Jack Freeman, D.C.M.

Sergeant Taliesin Thomas of the Camel Corps 10 Company and Welsh-born like himself, was awarded the D.C.M. for the attack on the station at Mudawarra on 8 Aug 1918.