Making it to Mafeking: the tale of Plumer’s relief of Baden-Powell’s besieged garrison 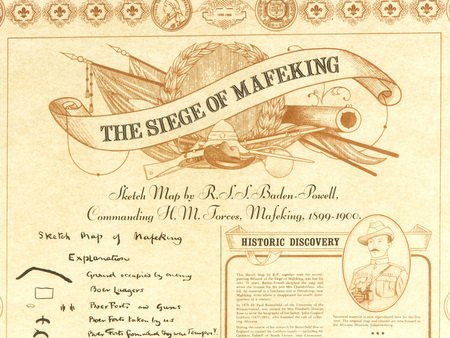 "SIEGE OF MAFEKING ALLEGED RELIEF BY PLUMER! No further message has been received from Colonel Plumer, who, with a column of the Rhodesian Regiment, was heard of some days ago at the Gaberones, 76 miles north of Mafeking, where his troops had arrived in three armoured trains and routed the Boer Patrol there. A report from Transvaal, however, states that Colonel Plumer arrived at Mafeking on the 23rd and accomplished the object of his expedition by relieving the gallant garrison under Colonel Baden-Powell from the siege it has endured since the commencement of war in October last." ~The Age 29 Jan 1900

Mafeking lies on the railway north to Rhodesia in the Northern tip of Cape Colony in South Africa near to the Bechuanaland border. Colonel Robert Baden-Powell (of subsequent Boy Scouts fame) was required to garrison Mafeking and resist any attempt by the Boers to capture it. Unlike Ladysmith and Kimberley, the two disastrous accidental sieges, Mafeking succumbed deliberately. Baden-Powell had sent Colonel Herbert Plumer with the Rhodesian regiment to a nearby town, Tuli, while he established his Bechuanaland Regiment in Mafeking with a handful of British officers. The second in command was Major Lord Edward Cecil, son of the British Prime Minister, Lord Salisbury.

Among the personalities in besieged Mafeking was Lady Sarah Wilson, aunt of Winston Churchill, in South Africa with her army officer husband. Lady Sarah is said to have been conducting spying activities against the Boers until arrested by General Snyman and exchanged for General Viljoen, held prisoner by Baden-Powell. For the rest of the siege, Lady Sarah's bunker was the social focus of the besieged town and she herself became an active member of the garrison.

From January 1900 food stocks in Mafeking fell dangerously low. Baden-Powell remedied this by witholding rations from the sizeable Baralong town in the south west corner of Mafeking. Colonel Plumer then attempted to fight his way into Mafeking with the native Rhodesian regiment and a handful of British officers, but was repelled with heavy losses. Parliament and newspapers of the time followed events closely:

"The progress of the relief column moving southward from Rhodesia to Mafeking, under the direction of Lieut-Colonel Plumer, is being keenly watched. At the time of writing, the column is within 40 miles of the beleaguered town, so we may reasonably hope that Colonel Baden-Powell and his plucky forces will ere long be set at liberty. The gallant commander of the relieving force has been in the Army nearly twenty-five years, having entered the York and Lancaster Regiment in 1878. In the Soudan Campaign of 1884, his conduct was highly commendable, and he received “mention” in the despatches. “

“He has seen active service in South Africa, having taken a prominent part in the suppression of the Matabele Revolt of 1896. In 1899, he was appointed to the forces on the Rhodesian Frontier, operating from Tuli as centre. Ever since the opening of the present war, the Boers in the district have been troublesome, and the long march from Tuli to Mafeking has been one succession of difficulties, testing Lieut.-Colonel Plumer's patience and resource to the utmost."

The siege was finally fought off and lifted on 16 May 1900. The relief of Mafeking caused ecstatic joy in Britain, entering into the public consciousness. So much so, that for or a time the word “maffick” meant to celebrate excessively.

Herbert Plumer was born in Torquay on March 13th 1857. Educated at Eton and Sandhurst, he received his commission in 1876 when he joined the 65th Foot (later the 1st Battalion, York and Lancaster Regiment). Plumer saw service in the Sudan at El Teb in 1884. From 1885 to 1887, Plumer took the Staff Course and he fought in South Africa during the Boer War where he led the relief column to Mafeking. Plumer became popular among his men who nicknamed him ‘Old Plum and Apple’ or ‘Daddy Plumer’. He rose to the rank of Field Marshal in WWI and commanded the 2nd Army in the Ypres Salient between 1915 and 1917, being the principal planner behind the highly successful attack on Messines Ridge in June 1917.

Buy the medals of Lt. Col. Plumer's personal servant and batman during the Relief of Mafeking/