Every time a WWII documentary featuring aircraft is screened on television, we are treated to frighteningly real and understandably shaky footage of tracers, bomb runs and dogfights. Spare a thought for the untrained cameramen who held nothing other than a 35mm camera for protection. The RAF hand-picked a number of men and women to form the ‘Film Production Unit’ based at Pinewood Studios. Like wartime correspondents in the modern age after him, Flying Officer Sidney Woodcock sacrificed his life for the screening of his Newsreels. The following extracts are taken from an original detailed letter written by the Air Ministry Director of Public Relations to Sidney’s widow, Violet, explaining what contribution Sidney’s life at Pinewood Studios made to the Allied victory.

“No film record existed of the epic air battles of 1940, so The Ministry of Information requested that Newsreels and propaganda films be made. The Film Production Unit (F.P.U.), within the RAF was formed, comprising of 27 Officers and 30 other ranks. By the end of the war, the total compliment had risen to over 400, nearly half of whom were film technicians on the ground. Since VE Day, it has been discovered that some of the RAF footage had been used in Germany in Luftwaffe training films."

“Once the Unit was established, the first problem was to find men – and women – to fill the posts. It was an essential condition that the Unit be staffed entirely from serving RAF members. The second major problem was equipment. No industrial potential was to be wasted on making film gear, so cameras were obtained from the second-hand market. Pinewood Studios was FPU’s base and known as RAF ‘Iver Heath’. The Commanding Officer was Wing Commander D.N. Twist, the “father” of the Unit who remained at Pinewood until 1942. The studios were not taken away from the film industry, but at the time they were being used for food storage and had this continued, deterioration of their facilities would have been inevitable. The Unit was completely self-contained, so along with film technicians – Directors, Scenario Writers, Editors, Sound Recordists , Cameramen – came the service “bodies” – cooks, clerks, drivers, police and all the normal personnel that go to make up and RAF unit. From here, all RAF filming activity in the Middle East, North Africa, Italy, Western Europe, U.S.A., Canada, South East Asia, Greece, Jugoslavia, Malta and Gibraltar, was overseen. 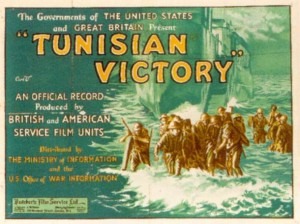 “Cameramen themselves would regularly fly with bomber squadrons supporting land operations. In this way major events were filmed, from the great ‘Desert Victory’, through the D-Day Landings, all the way to the fall of Rome and the liberation of Copenhagen. One of the first productions was a 2-reeler centred on Balloon Command which was issued to the public under the title of OPERATIONAL HEIGHT. So much was subsequently filmed, a magazine called ‘THE GEN’ was published to keep people abreast who were in the Service.”

“Beyond the usual British Newsreels and Films digested by Servicemen and the public, perhaps the most unusual use to which the Unit’s productions were put, occurred in 1944 when a special request was received from the French for some RAF films to show in the department of Savoy. The Maquis were ringed by the German army which had to be circumvented by the RAF in order to deliver their films. They were then shown in cinemas after which collections were made for a Maquis hospital.” 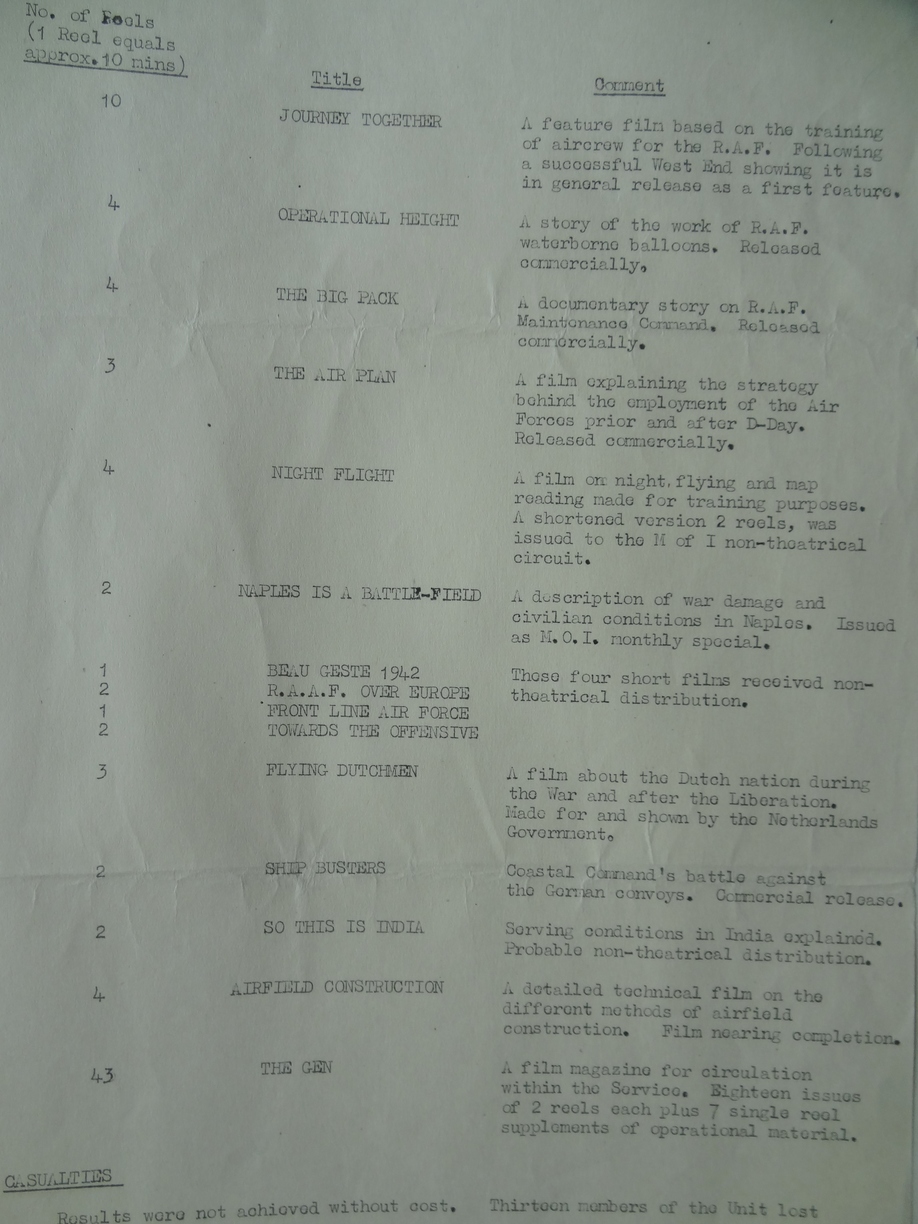 “The Operational Unit was started in 1942 by Squadron Leader E.P. Moyna who was an RAF pilot who transferred to the Unit, at first with little official encouragement within the force. A total of 57 cameramen flew on a total of 683 operational sorties, but the bulk of work was done by just 15 men. The Unit’s cameramen shared fully in the risks experienced by their squadrons. Frequently, a camera aircraft had to incur additional hazards by making several runs over targets. Subsequently, 9 members of the Unit was awarded the D.F.C. and 3 the Croix de Guerre, 7 were taken prisoner and 13 members lost their lives.”

“I feel you would like to keep this record of the achievements of the Unit in whose service your husband gave his life. I deeply regret that he did not live to realise fully the value of the contribution he made to the Allied victory.”