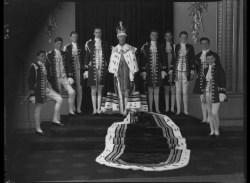 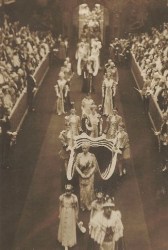 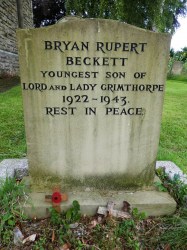 Bryan Rupert Beckett was born on 24 July 1922, the 3rd son of Ralph Beckett, 3rd Baron Grimthorpe, and Mary Alice Archdale, Baroness Grimthorpe, living at Easthorpe Hall, Malton, North Yorkshire. On 12 May 1937, Beckett was one of the 38 Pages in the Royal Procession of King George's Coronation, his specific role being Page to Lawrence John Lumley Dundas, 2nd Marquess of Zetland (to whom his mother was related), who, himself, carried the Sword of State during the service. An even more limited number of Page Boy swords were produced with this date on them, as many Pages used family swords that had been used at previous coronations.

Educated at Eton College until 1940 and Worcester College, Oxford from 11 October 1940 until leaving a year later to join the Officer Cadet Training unit at Royal Military College Sandhurst. Attached to the Royal Armoured Corps, Beckett was killed in a car crash in Amesbury, Wiltshire, whilst in service on 11 Mar 1943, aged just 20. He was to have been passed out for a commission in the Household Cavalry on the very day, but an armoured scout car in tow mounted a bank and overturned. The driver, Trooper A. Palfreyman, who escaped unhurt, said that the tow seemed to pull the scout car to the left. Officer Cadet The Honorable Bryan Rupert Beckett's funeral was at Amotherby Parish Church on 16 Mar 1943.

Watch the video of Pete Weston giving the History behind both the Coronation Sword and Staff Officer's Baton.