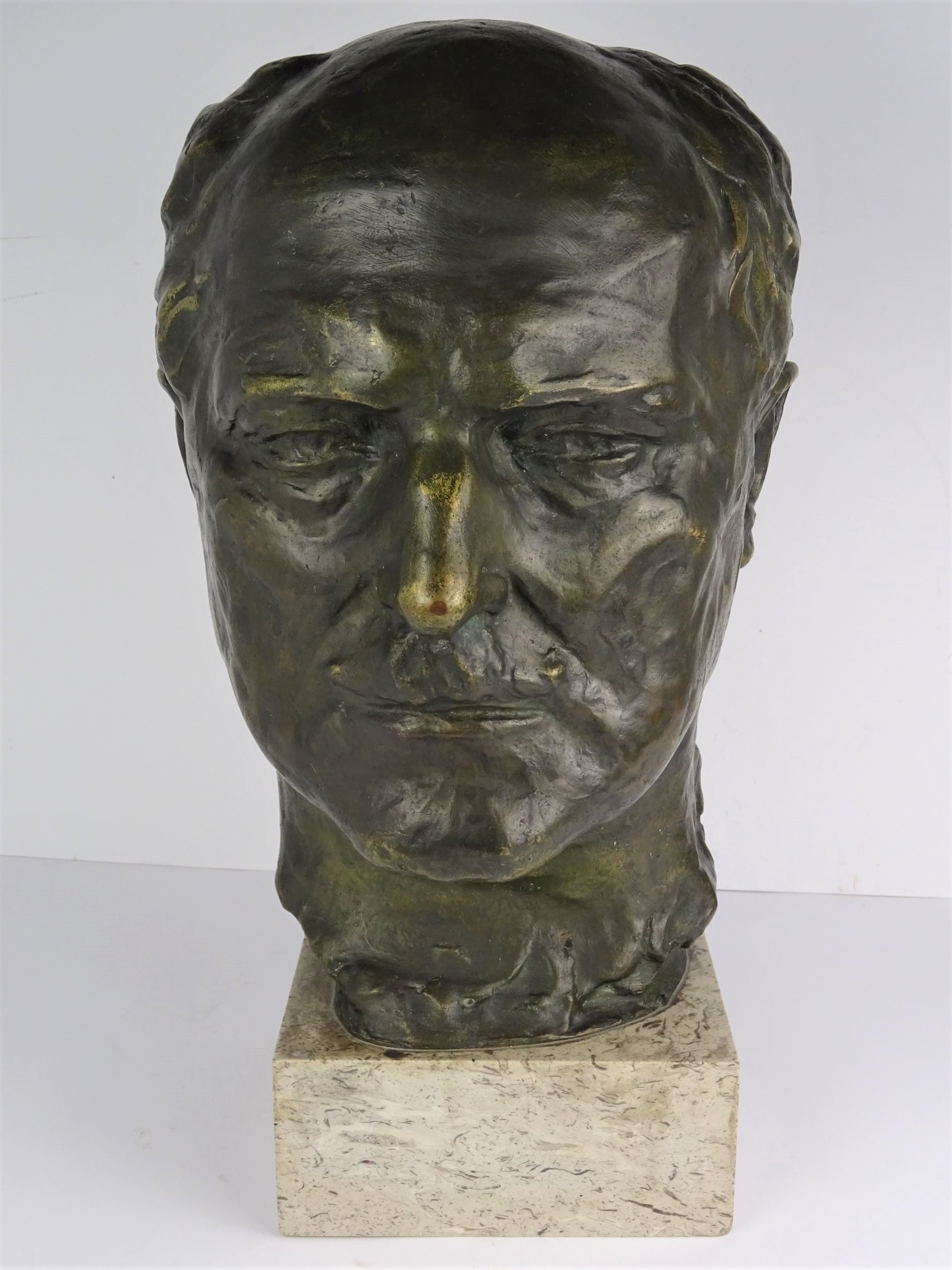 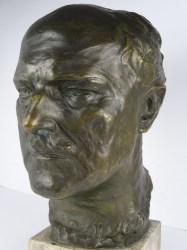 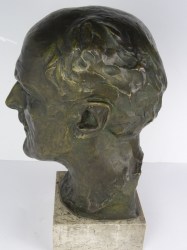 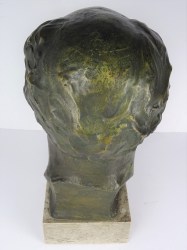 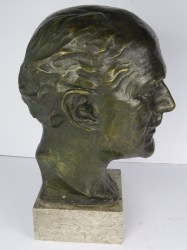 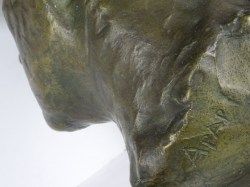 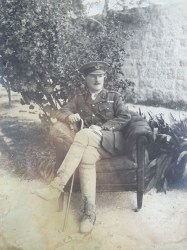 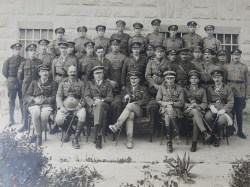 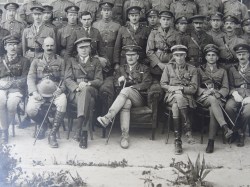 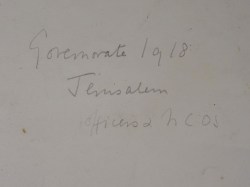 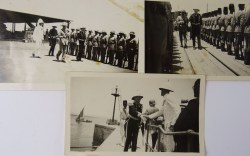 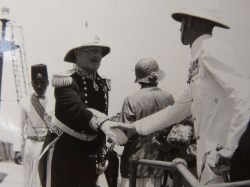 Biography of the Sitter

Sir Ronald Henry Amherst Storrs was born at Bury St Edmunds on 19th November 1881 and educated at Charterhouse and Pembroke College, Cambridge. He graduated with a first class honours in Classics in 1903 and the following year he entered the Egyptian Civil Service. In 1909 he was appointed oriental secretary at the British Agency in Cairo. After the outbreak of WWI, Storrs was appointed military governor in Jerusalem in 1917 and became the colleague and lifelong friend of Lawrence of Arabia. Their friendship was so lasting that Storrs would be the principal pallbearer at Lawrence's funeral in 1935.

Storrs was an influential figure of the Arab bureau formed in Cairo in December 1915, to which T. E. Lawrence was attached in Jan 1916, and a shared interest in classics led to a lasting relationship between the two men. On 10 June 1916 Hussein raised the Arab revolt, but the momentum seemed uncertain and in Oct 1916 Storrs secured permission to take Lawrence as a companion on a mission to Jeddah to reorganise it. Lawrence described Storrs as ‘the urbane and artful Governor of the place’ and wrote of Storrs in ‘Seven Pillars of Wisdom’ as being the most brilliant Englishman in the Middle East and described his love of music, literature, sculpture, and painting:

“The first of all of us was Ronald Storrs, Oriental Secretary of the Residency, the most brilliant Englishman in the Near East, and subtly efficient, despite his diversion of energy in love of music and letters, of sculpture, painting, of whatever was beautiful in the world's fruit... Storrs was always first, and the great man among us.”

“His shadow would have covered our work and British policy in the East like a cloak, had he been able to deny himself the world, and to prepare his mind and body with the sternness of an athlete for a great fight.”

Lawrence recorded that on board ship, sailing for Jeddah, Storrs chatted about Wagner and Debussey with the Arab leader, Aziz al-Masri, while sitting in a red leather armchair which mixed with sweat to turn his trousers a vivid scarlet. A portrait of Storrs by John Singer Sargent is reproduced in the publicly circulated 1935 edition of Seven Pillars of Wisdom. In 1917 Storrs served as assistant political officer to the Anglo-French mission of the Egyptian Expeditionary Force and was also attached to the secretariat of the British war cabinet. At the end of 1917 he was appointed military governor of Jerusalem and served in that capacity until 1920 when he became civil governor of Jerusalem and Judea.

Storrs was knighted in 1924 and appointed as governor to Cyprus in 1926, where he enjoyed considerable popularity for a while, but Enosis extremists, who wanted a closer union with Greece, caused an uprising. Troops from Malta and Egypt restored order but Storrs’ collection of books and works of art were destroyed. At the end of 1932 Storrs was appointed governor of Northern Rhodesia but ill health forced him to retire in 1934. After this he lectured on Dante, Shakespeare, the Bible and T.E. Lawrence and represented East Islington on the London County Council as well as giving his services to many other bodies. He died on 1st November 1955, aged 73, and is buried at St John the Baptist Church, Pebmarsh, Essex.

Biography of the Sculptor

Vincent Apap's best-known works include various public monuments in Valletta, such as the Triton Fountain, the bust of Enrico Mizzi, the statue of Paul Boffa and the statue of George Borg Olivier. Other notable works by Apap include statues in the Rotunda of Mosta, the Church of St. Augustine in Valletta, the Mdina Cathedral, St. George's Basilica in Gozo, the Qawra Parish Church, St Helen's Basilica in Birkirkara and the Jesus of Nazareth Parish Church in Sliema. His last major work was a bust of Guido de Marco which was completed when he was 89 years old. He also designed the motifs of the theatre at Palazzo Carafa in Valletta.

Apap was born on 13 Nov 1909 in Valetta, the elder brother of painter and musician, William and Jospeh Apap. After attending the Government Central School, Apap enrolled in the School of Art in 1925, studying sculpture under Antonio Micallef. He gained a scholarship to the British Academy of Arts in Rome and became a student of famous Maltese sculptor, Antonio Sciortino. Returning to Malta in 1930, he was commissioned to create the Fra Diego Monument in Hamrun. This work established his reputation in Malta and he regularly exhibited his works at the Malta Art Amateur Association exhibition throughout the 1930s, and was appointed assistant modelling teacher at the School of Art in 1934, becoming their head in 1947. He remained there until his retirement in 1971, before being recalled in 1978. Patrons of Apap's work included the Lieutenant Governor of Malta Sir Harry Luke as well as Lord Mountbatten, whose family still owns some of Apap's most notable sculptures. In the 1960s, two exhibitions of his and his brother William Apap's work were held in London. He was appointed Member of the Order of the British Empire in 1956, nominated a knight of the Sovereign Military Order of Malta in 1963, awarded the Gold Medal of the Society of Arts, Manufacture and Commerce in 1965, made Cavaliere Ufficiale Repubblica Italiana in 1968 and achieved the Order of Merit in 1993. Vincent Apap died in 2003, aged 93.