Framed pastel on linen portrait signed by John Shirley-Fox dated 1915 with border artwork to include Worcestershire Regiment insignia and memorial 'To Live in Hearts We Leave Behind is Not to Die' and dedication 'In Loving Memory of Edward Matthew Holland, son of Edward Ernest Holland & Margaret Holland, born October 17th 1894. He laid down his life for his country November 6th 1916 on the battlefield in France, "one of the very best".
NOW£395.00 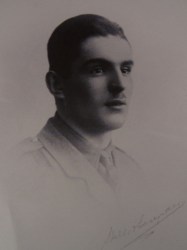 Edward Matthew Holland was born in Chelsea on 17 Oct 1894, the son of Edward Ernest and Margaret Holland of Preston Park Ave., Brighton and entered France in July 1915. Serving with the 2nd Battalion, Worcestershire Regiment, he was Killed In Action on 5 Nov 1916, declared the next morning. The following is from the regimental history of the The Battle of Le Transloy, 5 Nov 1916:

"The enemy actively disputed the advance, and the new line was entrenched under a hot fire of musketry from close range. Lieut. E. M. Holland, who had shown great gallantry throughout the attack, was shot and killed during the work of entrenchment. At first the new position was dangerously isolated, but presently an officer of the 16th King's Royal Rifles made his way forward to the line. His battalion had captured "Hazy Trench" and had made good their ground. The left flank of the Worcestershire was thereby secured. 2/Lieuts. J. O. Couldridge and E. M. Holland were killed. Lieut. E. P. Bennett and 2/Lieut. R. W. A. Watts were wounded, among others. Lieut. Bennett's bravery and fine leadership were fitly rewarded with the Victoria Cross."