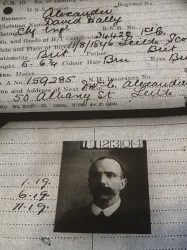 David Hally Alexander was born in Leith, Scotland on 11 Aug 1876, with his next of kin listed as William Grieg Alexander of 50 Albany St., Leith, and serving as a Chief Engineer in the Merchant Navy. Reverend William Grieg Alexander was educated at Daniel Stewart's College, Edinburgh and Edinburgh University, disembarking in France with the Royal Army Chaplain's Department on 23 Oct 1917, appointed Army Chaplain 4th Class and after the war serving as a Minister of the United Free Church of Scotland.