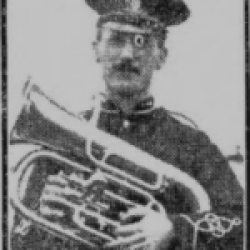 Thomas Henry Hayes was born in 1881, the son of Thomas & Sarah Hayes of 8 Clifton Terrace, Beverley Road, Hull, marrying Ann Hayes and living with their son at 4 Ilkley Villas, Estcourt Street. Hayes was the founder of the Hull & Barnsley Railway Band and worked as a railway time keeper & Hull Territorial Bandsman. Hayes enlisted with the East Riding Royal Garrison Artillery on 1903. He was taken ill on parade and died died on 3 Oct 1914. His death was recorded as 'due to natural causes'. He is buried at Hull (Hedon Road) Cemetery. The following is an extract of the Hull Daily Mail 5 Oct 1914:

"Mr Thomas Henry Hayes, 34, of 4 Ilkley Villas, Estcourt St., Hull, died shortly after parading in the military procession. The band left Cannon Street at 3:50 pm and it appears that, soon after commencing, he felt unwell and informed the bandmaster, receiving permission to fall out. In the street, however, he became decidedly worse and was subsequently found by Maud Beadleson, wife of a labourer, sho noticed that he was exhausted, and took him to her home, and placed him on the couch, where he later expired. Mr Hayes had for the last twelve years served in the E.R.G. Artillery. Deceased was also secretary and originator of the Hull & Barnsley Railway Co.'s Military Band and leaves a widow and one son."