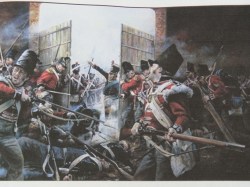 Thomas Newby was part of the 2nd Guards Brigade defending the north gate at Hougoumont Farm during the Battle of Waterloo on 18 June 1815, serving in Lt. Col. James MacDonnell's company during the battle.

MacDonnell was ordered by Wellington to hold Hougoumont Farm at all costs and after General Miguel De Alava's questioning of the defences at Hougoumont, Wellington simply replied: "Ah, you don't know MacDonnell, do you?" The defence of the north gate is regarded as one the greatest achievements during the battle, and an annual ceremony of 'hanging the brick' is performed each year to honour the efforts of MacDonnell and Corporal James Graham, who shut the gate and repelled a French attack.

After the battle, Wellington awarded MacDonnell £1000 as the 'bravest man in the British Army', and he insisted on sharing the prize with his Corporal.