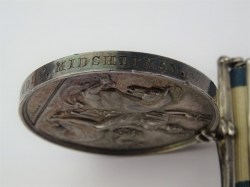 John Steddy served as a Midshipman aboard the Tuscan for the Boat Service action of 1 Nov 1809, one of just 19 issued at this rank and 100 recipients in total on the Admiralty roll. The action was the destruction of four French ships and seven Merchantmen in the Bay of Rosas off Spain by boats manned by men from the Ship's Companies of the Apollo, Cumberland, Philomel, Scout, Tigre, Topaze, Tuscan and Volontaire.

Lieutenant John Steddy, who was born in Ashford, Kent, entered the Royal Navy as a Second Class Volunteer aboard the Leonidas in Jan 1808 and was advanced to Volunteer First Class on the Mediterranean Station that Summer.

In the Dec following, he removed to the Tuscan, and on the night of 30 Oct 1809 served with the boats of a Squadron under the orders of Lieutenant John Tailour at the capture and destruction, after a 'fearful struggle', and a loss to the British of 15 killed and 55 wounded, of the French Store Ship Lamproie of 16 guns and 116 men, the Bombards Victoire and Grondeur, and the Armed Xebec Normande, with a convoy of seven Merchantmen, defended by numerous strong Batteries in the Bay of Rosas.

In late 1811, while still serving in the Tuscan, Steddy was once more in the forefront of the action, being employed in one of her boats at the destruction, 'under circumstances of the greatest danger', of two vessels laden with coffee and sugar, which had been run shore near the River Guadalquivir. And again, that Winter, he was engaged for six days and nights in an open boat in landing troops at Algeciras and Tarifa.

The following year was no less hectic, Steddy receiving two wounds in an attack by Tuscan's boats, in company with the Encounter's Gun-Brig, upon three Privateers lying under the protection of a Battery and of troops posted in the houses at St. Lucar. On this occasion, although one of the vessels was brought out, the Encounter ran aground and was captured by the enemy, and the boats, one of which was destroyed, sustained a loss of 28, out of an original complement of 43, killed and wounded.

Steddy finally departed the Tuscan in late 1813, having latterly served as a Master's Mate. There followed several more seagoing appointments on the West India, Cork and North Sea Stations, his advancement to Lieutenant taking place in Oct 1815, the year in which he retired on Full-Pay.

Steddy was subsequently employed as a Chief Officer in the Coast Guard and was still acting in that capacity as late as Sep 1860.