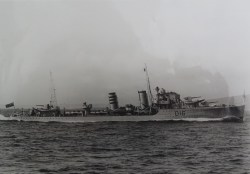 D.S.M. Gazetted 14 Jan 1941. Herbert Charles Spencer Edwards was born in Brixton, London on 13 Feb 1906, the son of Charles William and Ellen Louisa Edwards and joined the Royal Navy on 10 May 1921, first serving on H.M.S. Impregnable as a Boy 2nd Class and serving on H.M.S. Royal Sovereign and H.M.S. Repulse, amongst others, before joining the crew of the newly commissioned H.M.S. Ivanhoe on 24 Aug 1937 and staying with her on the outbreak of WWII, right up to her sinking on 1 Sep 1941, during the Texel Disaster. H.M.S. Ivanhoe was one of the ships enforcing the British blockade during the Spanish Civil War, before being transferred to the Western Approaches Command on the outbreak of WWII.

On 14 Oct 1939, she helped sink U-45 with depth charges and converted to minelaying during the Norweigian Campaign in April 1940 and during the Battle of the Netherlands. She then participated in the Evacuation of Dunkirk, saving over 2000 men until badly damaged by German aircraft on 1 June 1940. The Texel Disaster took place on the night of 31 Aug 1940 and resulted in the sinking of two British destroyers and damage to a light cruiser. H.M.S. Express struck a mine and in assisting, Ivanhoe was hit too and the resulting explosion knocked out her power for several hours, but the ship was able to raise steam at 01:45, and maintain just 7 knots. However, at 04:00, her propellers fell off and she was adrift. At 08:00, 4 M.T.B.s arrived and rescued all but 37 of the crew. Ivanhoe started to be submerged and listed and the captain ordered the ship to be abandoned. Shortly afterwards, Ivanhoe was spotted by a German aircraft and further damaged, but still did not sink. H.M.S. Kelvin applied the final blow by scuttling her by torpedo.

Edwards had remained as Chief Petty Officer with Ivanhoe throughout, from the Spanish Civil War, to Dunkirk and the last action at Texel. He was awarded his Long Service & Good Conduct Medal on 27 Apr 1939.