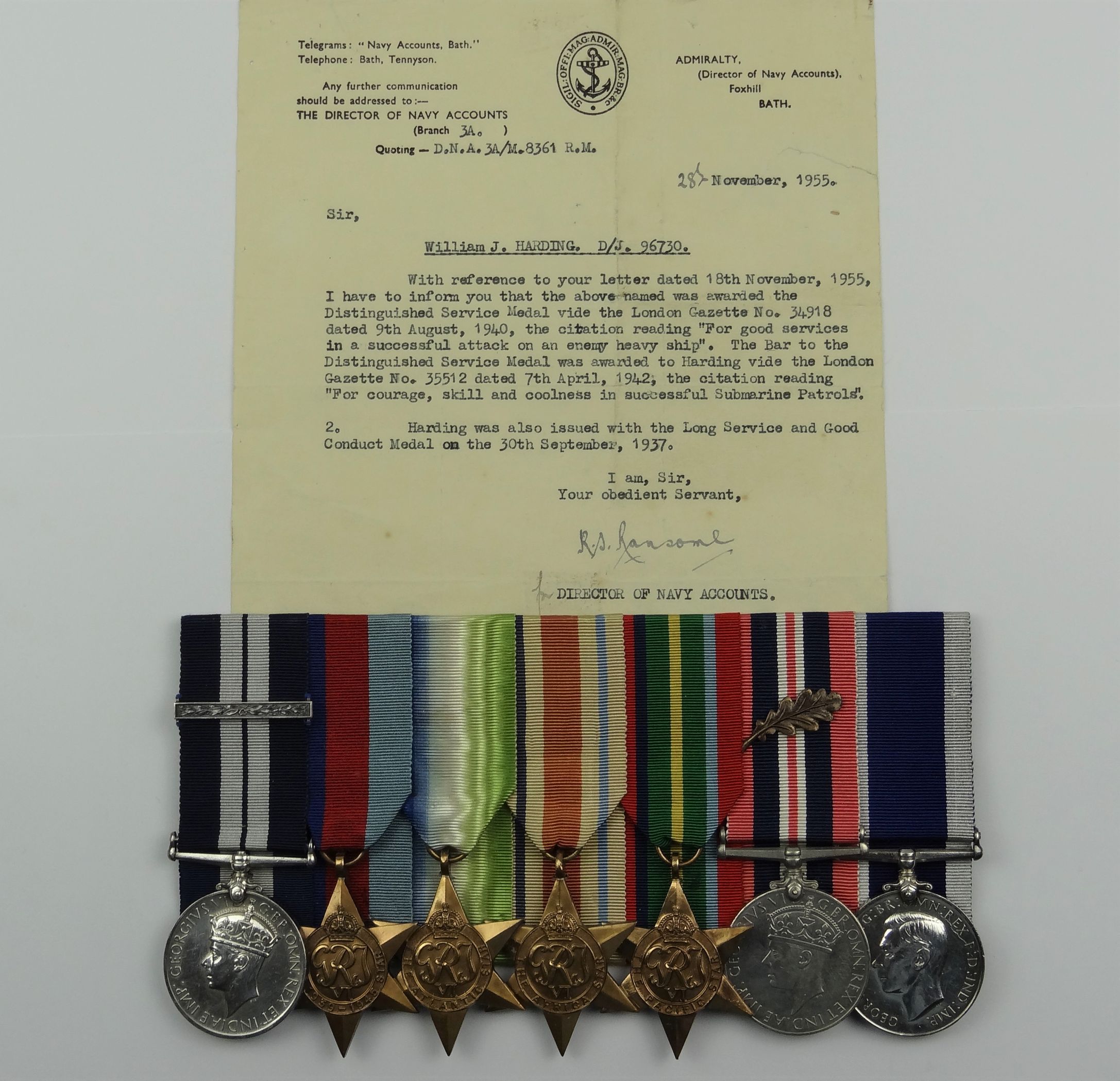 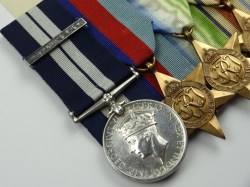 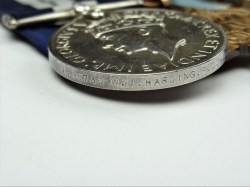 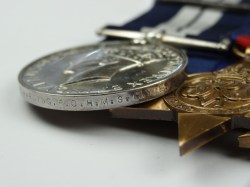 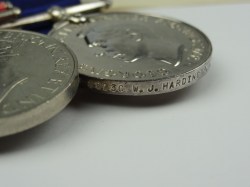 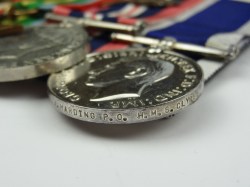 D.S.M. London Gazette 9 August 1940: "For good services in a successful attack on an enemy heavy ship."

Approximately 150 D.S.M.s with second award bars were issued for the Second World War. William James Harding was born on 22 May 1904 in Newcastle, Wicklow, Ireland. He joined the Royal Navy as a Boy 2nd Class in 1920 and served in the battlecruiser H.M.S. Hood from 8 Dec 1920 until 14 May 1923, being promoted to Able Seaman on 1 Dec 1922. He transferred to the Submarine Branch on 1 Oct 1926 joining H.M.S. Dolphin, the Royal Navy’s submarine base. Between June 1929 and Sep 1938, Harding served aboard a number of submarines including L18, Oberon, L19, Perseus and H.M. Submarine Sterlet. He was awarded the Naval L.S. & G.C. medal on 29 July 1937 upon his completion of 15 years qualifying service.

On 10 Sep 1938, Harding, now an experienced submariner, rated Petty Officer, joined H.M. Submarine Clyde (N12), a River class Vickers Armstrong built submarine commissioned in 1935. With a complement of 61 and under the command of Commander W. E. Banks, Clyde was with the 1st Submarine Flotilla, initially stationed at Malta at the outbreak of the WWII. Departing from the Scottish waters of Rosyth for her 10th patrol on 4 June 1940, Clyde headed to the Norwegian coast. She was cruising on the surface, recharging her batteries, on the evening of 9 June when she was strafed and forced to dive by a Heinkel 111. On surfacing again when the danger had passed, bullet holes were found in the steel casing of the conning tower but the pressure hull was secure. The following day at 1340 hours she sighted the masts of two German warships passing to the northward of Clyde and well out of torpedo range. The ships sighted were the Gneisenau and Admiral Hipper, escorted by four destroyers. Ten days later off Trondheim, on 20 June 1940, Clyde would encounter them once more. D. A. Thomas takes up the story in Submarine Victory:

“At about 10.15pm faint smudges of ships were sighted about eight miles away. Ingram soon made them out to be two capital ships in line abreast with a destroyer escort ahead. They appeared to be steaming straight toward Clyde, so the prospect of an attack looked promising. Clyde dived and prepared for battle. But controlling the boat in the sea that was running was incredibly difficult. To sight the targets Clyde had to be kept to an abnormally shallow depth so that her periscope standards were just awash. To prevent her breaking the surface in the lively sea meant maintaining a high submerged speed to give the coxwains manning the hydroplanes a chance to hold a steady depth.

Ingram issued orders for the attack. He positioned Clyde while he tried to identify the enemy ships. The further ship appeared to be a pocket battleship, while the nearer vessel, which Ingram selected as his target, he identified as Scharnhorst, though in fact she was Gneisenau. By 10.30 Clyde was well positioned. The escorting destroyer was about to pass clear. The battle cruiser dipped ponderously into the seas at an estimated twenty knots. At 10.32, and at a range of 4250 yards, Ingram watched the target come onto the graticule and he gave the order to fire. At calculated intervals the twenty-two-foot-long torpedoes bolted from their bow tubes and settled to their set depth as their mechanisms functioned. The hydrophone operator reported: “Torpedoes running, sir.”

The range at which the attack had been launched entailed a wait of about three minutes before the forty-five knot torpedoes would cover the distance. Such a wait seemed an eternity. Tension in the boat stretched to bursting point like a fully blown balloon. After 2 minutes and 55 seconds there was a violent explosion and the tension in the control-room burst into gasps of jubilation. Several minutes later the remainder of the torpedoes were heard to explode innocuously on the sea bed several miles away. To avoid a counter-attack Clyde was taken deep, but she lost her trim and plummeted stern heavy, with the first lieutenant striving urgently to halt her ungainly descent. But neither the blowing of tanks nor the use of hydroplanes took the way off the downward plunge. Clyde’s was a riveted hull and at the depth she reached before Lieutenant F. E. MacVie, the first Lieutenant, caught her descent, the rivets groaned and cracked alarmingly to the mighty external pressure which gripped the boat. One motor had to be switched off as the crushing pressure distorted the starboard propellor shaft which nearly seized up in the glands through which it passed to penetrate the pressure hull. A four-inch pillar began to bend as the sea’s mighty strength tried to crush Clyde to extinction.

Meanwhile a pattern of eight depth-charges exploded, only one of which was near enough to shatter some lamps and start an oil leak. The counter-attack failed to develop beyond that one pattern and Clyde sneaked away to safety. The damaged Gneisenau, which had only left Trondheim seven and a half hours earlier, headed back at a reduced speed. Clyde’s torpedo hit kept the battlecruiser out of action for six months. Ingram could congratulate himself on a masterly effort, made all the more brilliant by the extremely difficult conditions under which the attack was made.’

At a time when awards were already being scaled down from earlier in the war, Commander Ingram and Lieutenant MacVie were both awarded the D.S.C. for the Gneisenau action. Harding was one of four crew members to receive the D.S.M while seven received “mentions”.

Later during this patrol, on 22 July, H.M.S. Clyde fired 6 torpedoes at what was thought to be an enemy submarine. Luckily the torpedoes missed their target as they were aimed against H.M.S. Truant (Lt. Cdr. H. A. V. Haggard, RN). Truant was supposed to have vacated this area earlier that day but was delayed. Clyde rightfully attacked the submarine contact as enemy submarines were expected to operate in this area. On 7 August, H.M.S. Clyde departed Rosyth for her 12th war patrol, again off the Norwegian coast, at the completion of which on 23 August, Harding was disembarked from Clyde for the last time.

On 14 Oct 1940, Harding joined the newly launched U-class submarine, H.M.S. Unbeaten, under the command of Lieutenant E. A. Woodward. After completing trials and a maiden patrol off Brest, Unbeaten departed Portsmouth for Gibraltar on 12 April 1941, from where she proceeded to Malta to join the 10th Submarine Flotilla. Tim Clayton in Sea Wolves describes the Unbeaten’s hair-raising first Malta patrol during which Harding prevented his Captain from surrendering while under attack:

“The new arrivals were soon put out on patrol, the inexperienced crew of Unbeaten receiving a fiery baptism. They left Malta on 11 May and close inshore Teddy Woodward attacked a group of schooners with three torpedoes from long range, though he missed. The next day he followed a laden schooner into the anchorage at Al Khums. They crept along the bottom to within 1000 metres and then surfaced with the hatch open and the crew swarming to the gun. Jack Casemore saw the Italian crewmen diving off the bowsprit.

The following evening Woodward was manoeuvring inside a destroyer to get at two merchants. Jack Casemore was at his diving station on the helm, steering the boat. Suddenly, Unbeaten hit bottom at a spot where their chart showed deep water, bouncing up to twenty feet. The destroyer was so close that Woodward was certain they must have been seen. When he reached periscope level the escort was 600 yards away and approaching at high speed. It was probably too late to dive to avoid collision, even if there was now more than eight feet under the keel. He muttered, ‘Oh my God!’, then yelled, ‘Stand by to be rammed,’ and ‘Shut watertight doors,’ ordered a swing to port to take a glancing blow and bolted for the control tower hatch. ‘Tosh’ Harding, the raw-boned southern Irish coxwain, grabbed him by the legs, said ‘I wouldn’t do that sir!’ and pulled him down while the first lieutenant dived the boat.

They waited for the crash. Nothing happened. Unbeaten reached the bottom here at sixty feet. They waited twelve minutes then took a look. Their target was now 4000 yards away. The destroyer must never have seen them at all and had just turned away at the end of her zigzag.’

Over the next 8 months, Unbeaten completed 14 patrols in the Mediterranean, during which she attacked a wide range of enemy ships, submarines and land targets and was also subjected to prolonged retaliatory depth charge attacks.

On 4 Jan 1942, she departed Malta on her 16th war patrol (15th in the Mediterranean), headed for the Gulf of Taranto where, on 12 Jan, south-west of Cape Spartivento, she caught a German U-boat on the surface and sank her. The U-boat in question, U-374, had been depth-charged and damaged 4 days earlier by destroyers H.M.S. Legion and HrMs Isaac Sweers. Although only 4 miles from the coast, Lt. Cmdr Woodward surfaced and picked up a sole survivor from a crew of 43.

On 1 Mar 1942, in the Tyrrenian Sea, Unbeaten sank the 5000 ton Vichy tanker, PLM-20 and survived some close depth charge retaliation from the Italian torpedo boat, La Bombarde, before returning to Malta. On her following patrol (19th) she was again heavily depth charged during an action with Italian merchant shipping off Calabria, Italy, before, on 17 Mar 1942, she torpedoed and sank the 896 ton Italian submarine Guglielmotti of Cape Dell’Armi, Italy. According to Italian sources she had been on passage from Taranto to Messina. The torpedo boat Francesco Stocco arrived on the scene, dropped 17 depth charges and picked up one body but there were no survivors.

On 1 Apr, Unbeaten was damaged by enemy bombing while laying submerged at Malta and due to the heavy air raids, she had to go to Gibraltar for docking and repairs. Later it was decided to send her back to England, taking the place of H.M.S. Upholder (Lt. Cdr. M. D. Wanklyn, V.C. D.S.O**) which was due for refit. On 11 Apr, making rendez-vous with Upholder en-route, to take on board Captain Wilson, R.M., the leader of a raiding party, the crew of Unbeaten were the last to see H.M.S. Upholder which went missing in action three days later.

Unbeaten spent the summer months undergoing a refit in Chatham Dockyard and Harding, now in the rate of Acting Chief Petty Officer, having served in 19 patrols in Unbeaten with the ‘Fighting Tenth’ Submarine Flotilla to add to his previous 12 patrols in H.M.S. Clyde, was awarded a bar to his D.S.M. ‘Teddy’ Woodward, his commanding officer, received the D.S.O, whilst his Lieutenants, A. D. Piper and C. W. S. Lambert, both received D.S.C.s. Piper was, in fact, the first officer of the Royal Naval Reserve to win the D.S.C. in the Second World War and he would go on to command H.M.S. Unsparing with considerable success and collect a total of three D.S.C.s and a D.S.O. for his endeavours.

Removing to serve in shore establishments from Aug 1942, Harding received both his D.S.M. and bar at an investiture on 13 Oct 1942. His retirement from sea-going duties proved timely, since Unbeaten, under the new command of Lieutenant D. E. O. Watson, D.S.C., was sunk and lost with all hands in the Bay of Biscay on 11 Nov 1942. It was the first patrol of her second commission and some of those lost had served alongside Harding. It is believed that she was probably attacked and sunk in error by a Royal Air Force Wellington of No. 172 Squadron, Coastal Command.