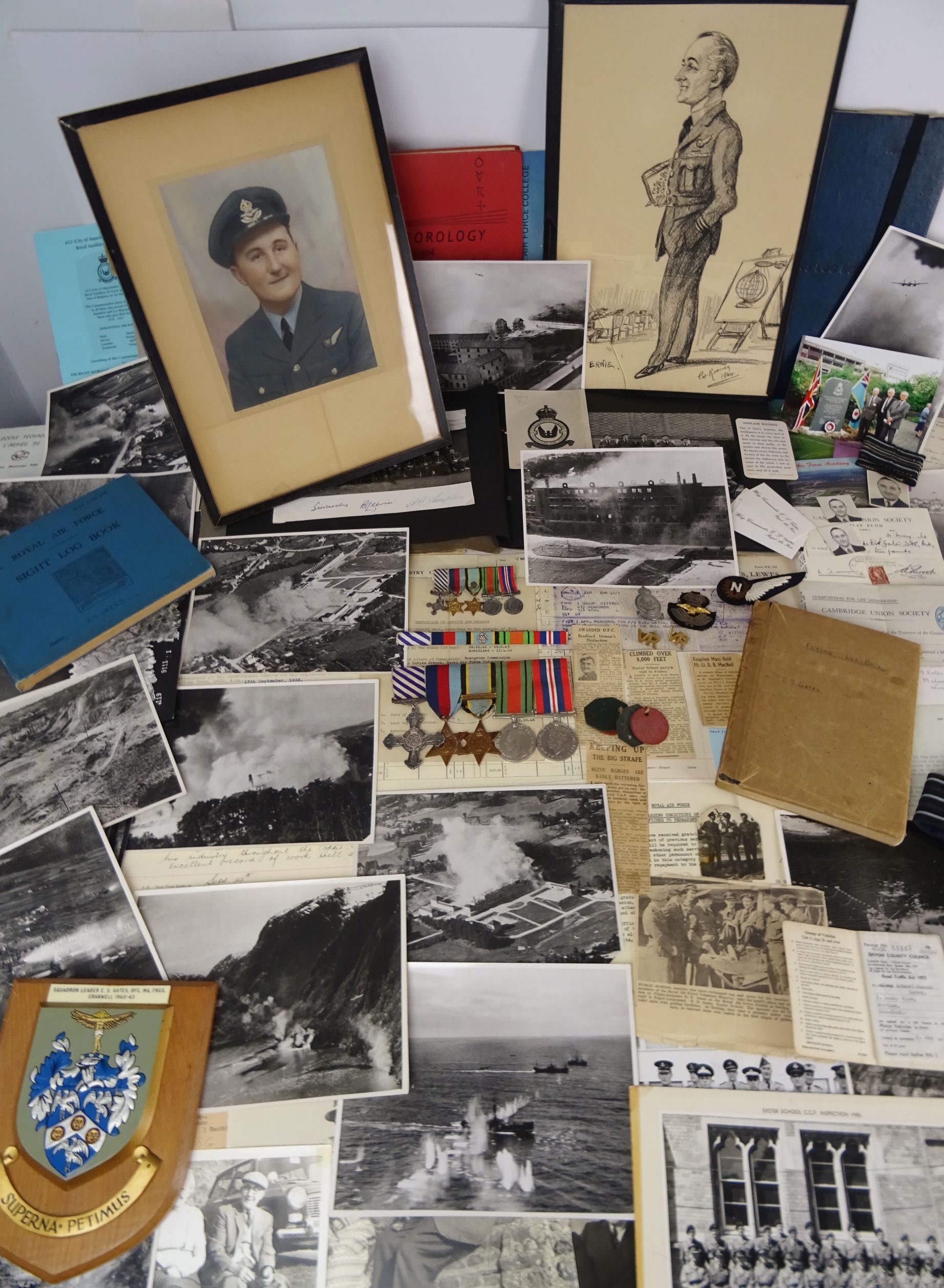 "F/O is amost dependable navigator who, with F/O Topliss as his pilot, has completed a total of 50 missions against a variety of targets. In August 1944 he played a notable part in the most successful low level daylight attack on a school building used by S.S. Troops at Égletons, S.E. of Limoges. Between July 1944 and Jan 1945, F/O Gates was navigator in 23 attacks by night against rail targets both in occupied territory and in the heavily defended Ruhr area of Germany. On 25th Dec 1944 he located and attacked most successfully the marshalling yard at St. Vith. As a result of this attack a large fire was started and much damage caused. In the same month, as a result of locating the railway juntion at Hillesheim, F/O Gates was in large measure responsible for another telling attack. As the bombs exploded a mushroom of smoke was seen to be issuing and debris was flung 400 feet into the air. Targets which this officer has assisted his pilot in finding also include road convoys as well as enemy shipping and harbour installations in the Scheldt area where attacks have been pressed home in the face of enemy fire. Throughout his tour, F/O Gates has always shown himself to be determined to find the target, frequently in spite of very bad weather. His courage and his resolution have been of the highest order and these qualities, allied with the determination of his pilot , have produced excellent results."

On 18 August fourteen Mosquito Mk.VI crews from 613 (City of Manchester) Sqn. were led by Wng. Cdr.. Charles Newman on a daring low level attack on a school building at Égletons, 50 miles south-east of Limoges, which was being used by the S.S. and surrounded by members of the French Maquis. Air Vice Marshal Basil Embry (A.O.C. of 2 Group) and Group Captain Leslie Bower (Officer Commanding) went along to observe the squadron in action. Footage of the raid can be found here: [insert link] The Mosquitoes located and bombed the target, scoring at least 20 direct hits which destroyed the school. One Mosquito was struck in the starboard engine by flak over the target area and crash-landed north of the Loire. Pilot, Flt. Lt. House and navigator F/O Savill escaped through France into the Pyrenees, returning to Britain via Gibraltar. Ernest Samuel Gates was born in Bradford, Yorkshire in 1922, the son of Mr & Mrs W.E. Gates of 6 Poplar Ave., Great Horton, Bradford and joined the R.A.F. in Nov 1941, first flew at 47 Air School, Queenstown, South Africa on 12 Mar 1943 and moved on to 62 O.T.U. Ouston, Honiley and Bicester, flying with his future partner pilot F/O Topliss in Beaufighters at Chedworth Gunnery School. His first operation in 613 Squadron Mosquitos was on 23 July 1944 and would not end until 19 Apr 1945, 65 daring missions later.