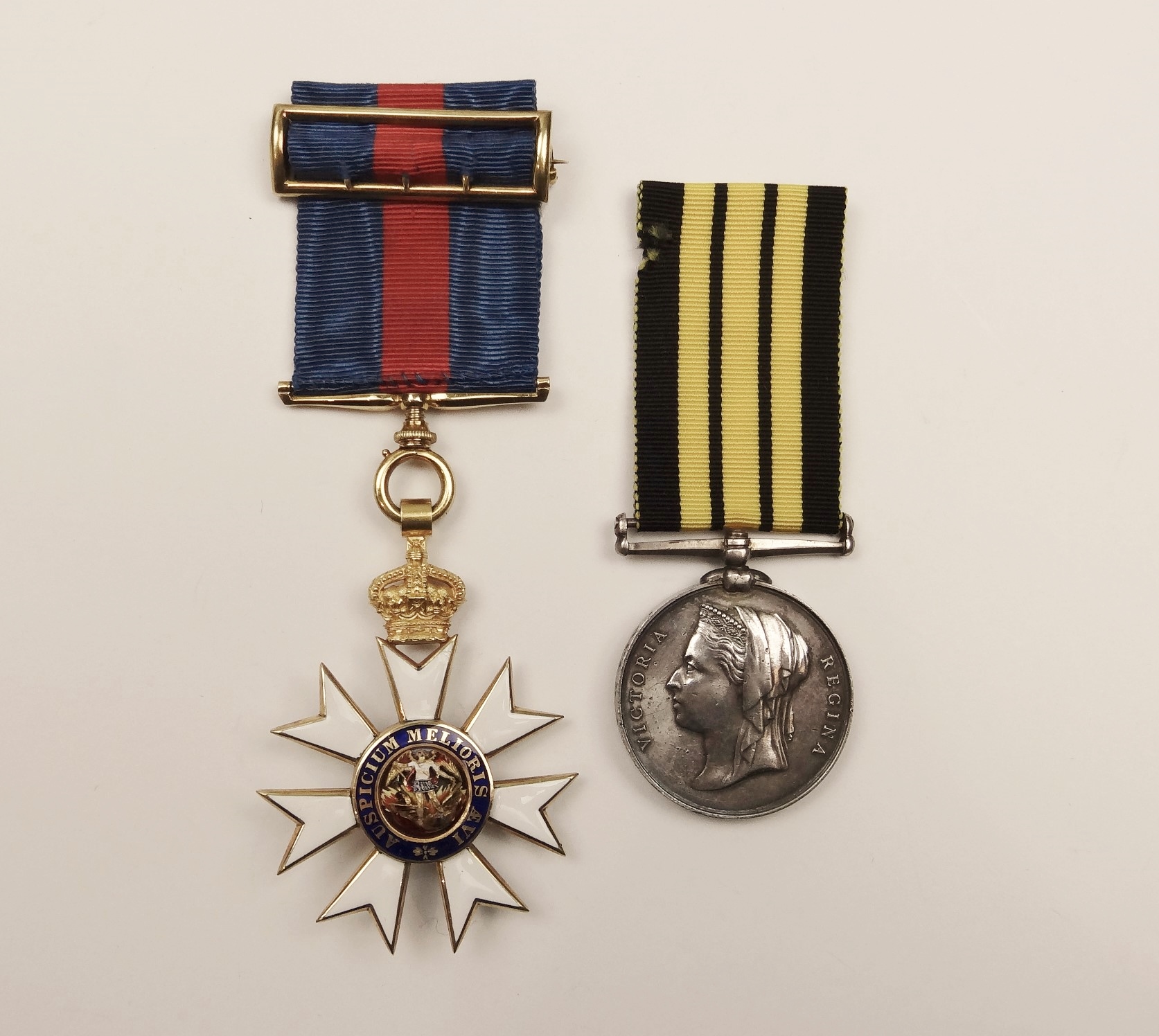 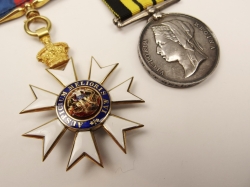 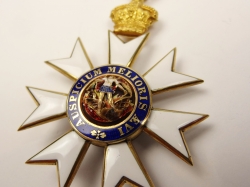 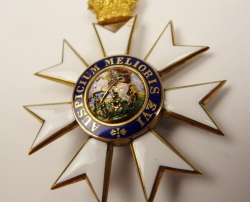 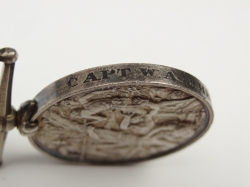 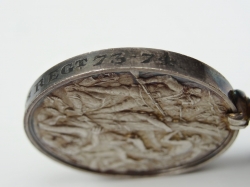 C.M.G. London Gazette 8 May 1874: ‘Major William Augustus Tryden Helden, of the 100th Regiment of Infantry, lately selected for Special Service on the Gold Coast.’ William Augustus Trydell Helden, who was born in Dublin in August 1834, was originally commissioned into the 22nd Regiment in March 1856. Advanced to Lieutenant in March 1858, he transferred to the 3rd West India Regiment in the following year, a move that led to his participation in the defence of Lower Combo in the Gambia in February 1864, when he acted as the British force’s Adjutant. He was also engaged in operations up the River Gambia in June of the same year, and was present at the reduction of Junca Cunda and Canni Canni Tenda, where he landed with the attacking party and destroyed the fort. Advanced to Captain in April 1870, Helden was placed on half-pay, but in May 1873, in his new capacity as Civil Commandant at Secondee, he was employed on special service on the Gold Coast, where he served until February of the following year. During that period he accompanied Commodore Commerell’s force up the River Prah, with a detachment of Houssas, and was severely wounded, in an action that receives due recognition in Brackenbury’s Narrative of the Ashantee War:

"On the 7th August 1873 a report had arrived from Dixcove that the Ashantis were trying to cross the Prah, two days’ journey from its mouth, into the Wassaw country to the westward, to meet the Ashantis under Akyempon, and that they were together intending to attack Dixcove and Secondee. The Commodore, on receipt of this intelligence, sent the Argus to the windward coast, and on the 13th sailed himself in the Rattlesnake for Secondee. At 9 a.m. on the 14th he left with a number of boats armed and manned, in order to proceed to Chamah, with Captain Helden, the civil commandant at Secondee, and Commander Luxmoore of the Argus, to hold a palaver with the kings and chiefs of Chamah, hoping to obtain their assistance to drive the Ashantis from an island which they were said to be holding some miles up the river. The Commodore also proposed to ascend the river Prah and ascertain something of the locality in that direction, with a view to ultimately conveying a force in boats up the river to attack the flank of the Ashantis. At ten o’clock, accompanied by Captain Helden and Commander Luxmoore, he proceeded unarmed, and with every friendly intention, and urged the chiefs to assist Her Majesty’s Government against the Ashantis. The chiefs denied that they had rendered any assistance to the Ashantis, and expressed their intention of remaining neutral in the war. The Commodore remonstrated with them, and asked the king to lend him two chiefs to accompany him up the river Prah, to make a survey of the river with his boats. This the king refused to do; but the palavering was so peaceful that the Commodore was not induced to discontinue his project.

"Embarking in his galley, a procession of boats proceeded up the river in the following order: Colonial steam-launch, under Sub. Lieutenant Cross of the Argus, with rockets on board, towing the Rattlesnake’s galley with the Commodore and Commander Luxmoore and Captain Helden on board, and followed by the steam-cutter of the Simoom, with rockets, towing a gig and whaler of the Rattlesnake. About 200 yards up the river the Colonial steam-launch broke down, and the gig remained with her, the Commodore proceeding in his galley in tow of the steam-cutter behind the whaler. The Commodore deemed it prudent to proceed on the Chamah side of the river, considering the inhabitants friendly, and that there might be marauding-parties of Ashantis on the other bank. The river was 70 or 80 yards broad, not less than six feet deep, with a current running about two miles an hour. All proceeded satisfactorily until, at about a mile and a half up river, without warning, and without any enemy being seen, a heavy fire was poured into the boats from the dense bush on the Chamah side. The Commodore was shot down and badly wounded on the right side, and Commander Luxmoore and Captain Helden were severely hit at the first discharge. The small-arm men in the boats opened fire, but the rockets could not be used, as the steam-cutter was towing boats. The boats repaired to mid-stream, and a number of men being wounded, the Commodore ordered the expedition to return to the Rattlesnake. Himself prostrated by loss of blood, his orders were carried out by Commander Luxmoore, who, nearly fainting from his wounds, continued to direct the operations till the fire from the boats had driven the enemy out of the bush. Nearly all of the officers had been shot in the back. Four of the gig’s crew fell wounded from the thwarts, while two men were shot down in the whaler. The boats were towed down the river, and reached the Rattlesnake about 6 p.m."

Helden was subsequently mentioned in despatches, given the Brevet of Major, and created a C.M.G.; he was also presented with a sword by command of the Secretary of State for the Colonies. Returning to full pay in the 100th Regiment (afterwards the Leinsters), he finally retired as a Lieutenant-Colonel in August 1884 and died in September 1896. His Ashantee 1873-74 Medal is believed to be one of just two inscribed to the 100th Regiment.