There is a Naval Memorial in Plymouth on which is inscribed the name of a Welshman: Able Seaman Ernest Thomas of Trealaw, Glamorgan.  His is a tale of gallant acts upon terrible, burning, black Spanish waters, recognised by an honour bestowed by King George VI. For Thomas was a crew member aboard H.M.S. Hunter; a seaman and ship both destined to rest in eternity on the freezing Norweigan seabed near the mouth of the harbour at Narvik.

H.M.S. Hunter (H35) was an H-class destroyer built for the Royal Navy in the mid-1930s and patrolled Spanish waters during the Spanish Civil War, enforcing the edicts of the Non-Intervention Committee. From 1936-37 the ship enforced the arms blockade imposed on both sides by Britain and France until she struck a mine, south of Almeria, on the afternoon of 13 May 1937.

The ship suffered severe damage, with a heavy list, and her radio wrecked and bow flooded. 8 of her compliment were killed and 24 wounded. The mine had been laid several weeks earlier by two ex-German Spanish Nationalist E-boats, the Falange and Requete.

London Gazette 12 Nov 1937, St. James's Palace, S.W.1: 'The KING has been graciously pleased to approve of the Award of the Medal of the Military Division of the Most Excellent Order of the British Empire, to the undermentioned for gallant and distinguished services rendered when HMS Hunter was mined off Almeria on the coast of Spain on 13 May, 1937.’ 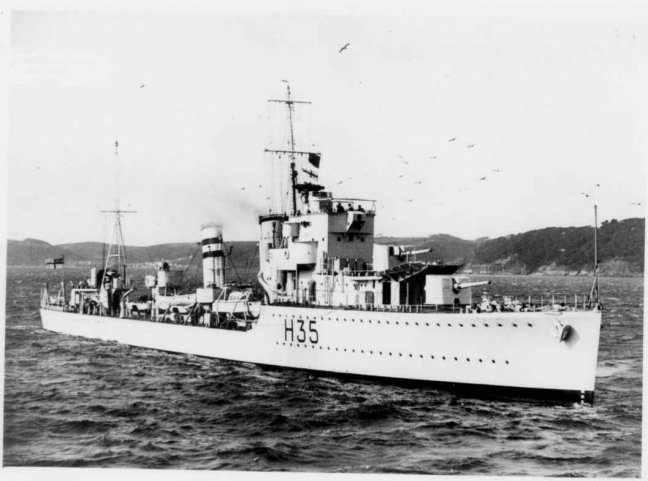 ‘For Gallantry and Meritorious Service:

‘An explosion caused by the mining occurred underneath the Stoker Petty Officers’ and Torpedomen’s Mess Decks. To reach the ratings on these mess decks, this party had to jump down 8 feet, the ladder being blown away, into 3 feet of oil fuel and on to a deck which might not have been intact. During this period they remained in imminent risk of falling through the shattered deck into the water and fuel. Moreover, they were under the impression that the ship was about to founder. Their exertions to save life consisted in dragging living and dead men from under wreckage and out of the oil fuel and passing them up on deck. This operation lasted from 5 to 10 minutes. The rescued were in very severe danger from having swallowed oil fuel and had they been left would undoubtedly have died. Others were severely burnt and immersion of their wounds in oil fuel, if prolonged, would undoubtedly have caused death.’ 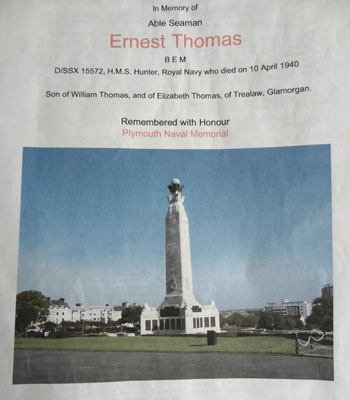 Hunter was under repair for the next year and a half, after which she rejoined the Home Fleet at Scapa Flow in early 1940. On 6 April Hunter escorted destroyer minelayers as they sailed to implement Operation Wilfred; a plan to prevent the transport of Swedish iron ore from Narvik to Germany.

During the First Battle of Narvik on 10 April 1940, Hunter’s flotilla attacked the German destroyers that had transported troops to occupy Narvik. Lead ship H.M.S. Hardy spearheaded a surprise dawn raid on Narvik harbour during a blizzard of snow. H.M.S. Hotspur and H.M.S. Hostile were initially left at the entrance, but Hunter followed Hardy and fired all eight of her torpedoes into the mass of shipping. One torpedo hit Z22 Anton Schmitt in the forward engine room. As the British ships were withdrawing, they encountered five German destroyers at close range. Hardy was suddenly ablaze and forced to run aground. Hunter took the lead, but suffered a torpedo hit, her speed dropping rapidly. Hotspur, immediately behind her, was temporarily out of control due to two hits, and rammed her from behind. When the ships managed to disengage, Hunter capsized. 107 crew were killed and another 5 died of wounds. German destroyers rescued 46 men, but unfortunately Ernest Thomas was not among them.
As the War Graves Commission commemoration reads: 'In Memory of Able Seaman Ernest Thomas B.E.M. D/SSX 15572 H.M.S. Hunter, Royal Navy who died on 10 April 1940.’
H.M.S Hunter’s wreck was finally rediscovered on 5 March 2008 by the Norweigan Navy mine control vessel, HNoMS Tyr, after being missing for nearly 70 years. Hunter’s final resting place was marked with wreaths cast into the sea.