Did Dambusters in “O” for “Orange” Attack the Wrong Dam? 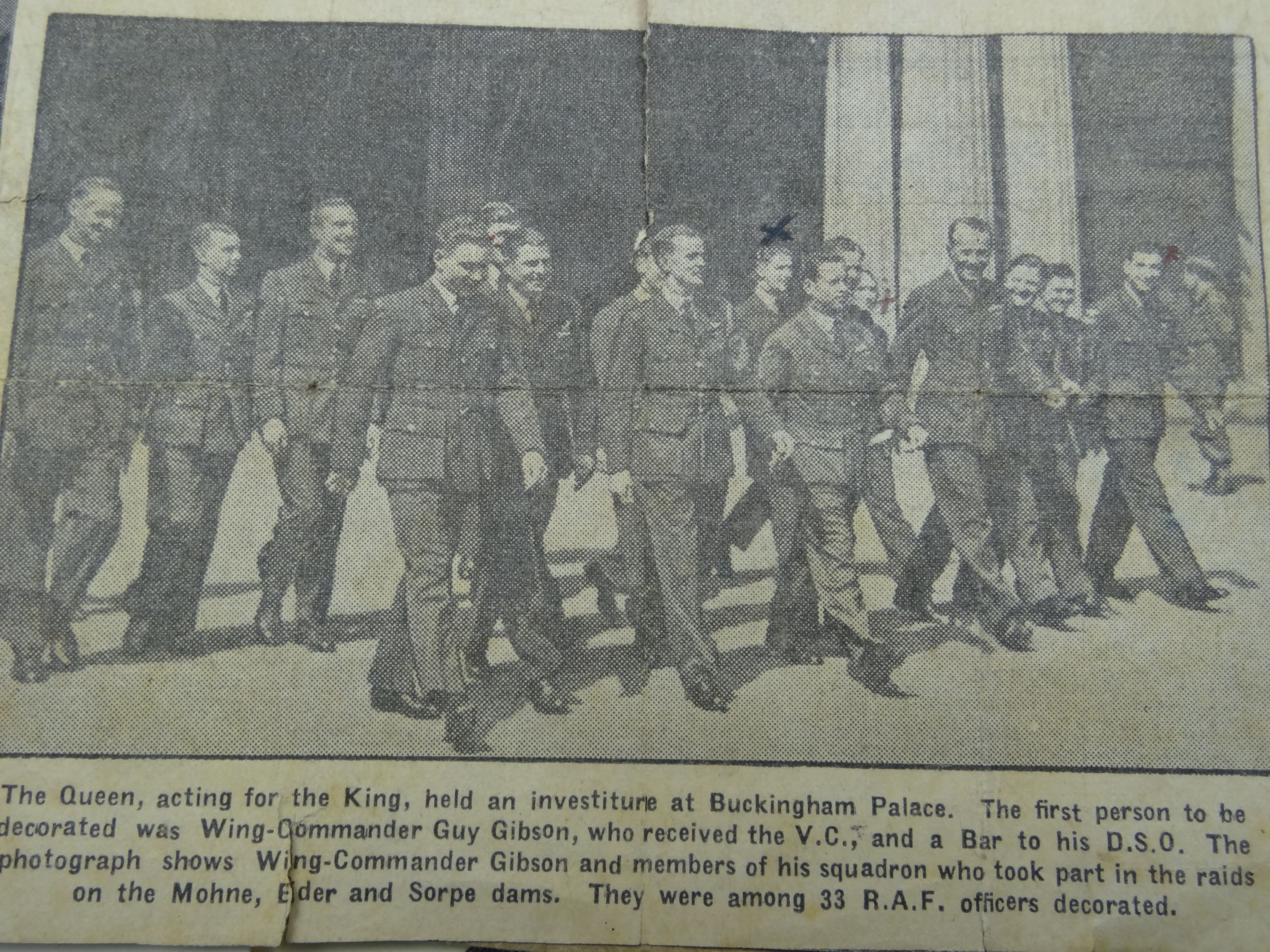 On the night of the legendary mission, “O for Orange" was amongst the last wave of Lancaster Bombers to take off from RAF Scampton, captained by Bill Townsend. Airborne at exactly ten minutes past midnight, the aircraft climbed from the runway, and, weighed down by Barnes-Wallis’ incredible invention, Navigator Lance Howard recalled:

“I had visions of the bumpy grass take-off causing the lights under the fuselage to be shaken loose so that instead of being 60 feet above ground, we would finish up 60 feet underneath it.”

Wireless Operator George Chalmers breathed a sigh of relief as ‘she brushed through the airfield boundary hedge like a steeplechaser’, whereas pilot, Bill Townsend, would later maintain that they actually went through it, semi-stalling as he just got AJ-O into the air.

Chalmers observed the Lancaster's progress from the dome on top of the fuselage. He was conscious that he stood ‘watching history from the astrodome, although everything happened so quickly at 100 feet that incidents came and went almost before the mind could appreciate them’. As the crew headed across Holland and Germany at extremely low level, Howard scanned his route charts and ‘set course for Southwold on a beautiful full moon night’. Now and again a fellow Lancaster was glimpsed skimming over the waves. As “O for Orange” approached the Dutch coast, Townsend noted that the ‘the land below was peaceful, with no sign of war.’ But as he was to admit in debriefing, this was just the calm before what was to become a ‘very, very nasty flight.’

Flak was soon seen far ahead on their port side, probably that which shot down Lewis Burpee and the crew of “S For Sugar”. Another Lancaster in their formation, “C for Charlie” was also shot down on the outbound flight, with Chalmers remembering ‘away to starboard searchlights and lots of flak and a terrific explosion in the sky.’ At 0145 hrs, another warning was received about flak at the Dülmen lakes and almost immediately they were caught in a searchlight. According to Navigator Lance Howard’s account Townsend ‘threw that heavily-laden Lancaster around like a Tiger Moth and we flew out of it.’ Nearing the target, Chalmers was astonished when Townsend flew below tree level and down a fire break in a forest; this was to escape a concentration of flak as they approached the Mohne Dam. Facing backwards, rear gunner, Ray Wilkinson fired full tracers and extinguished two searchlights that had briefly played upon AJ-O. 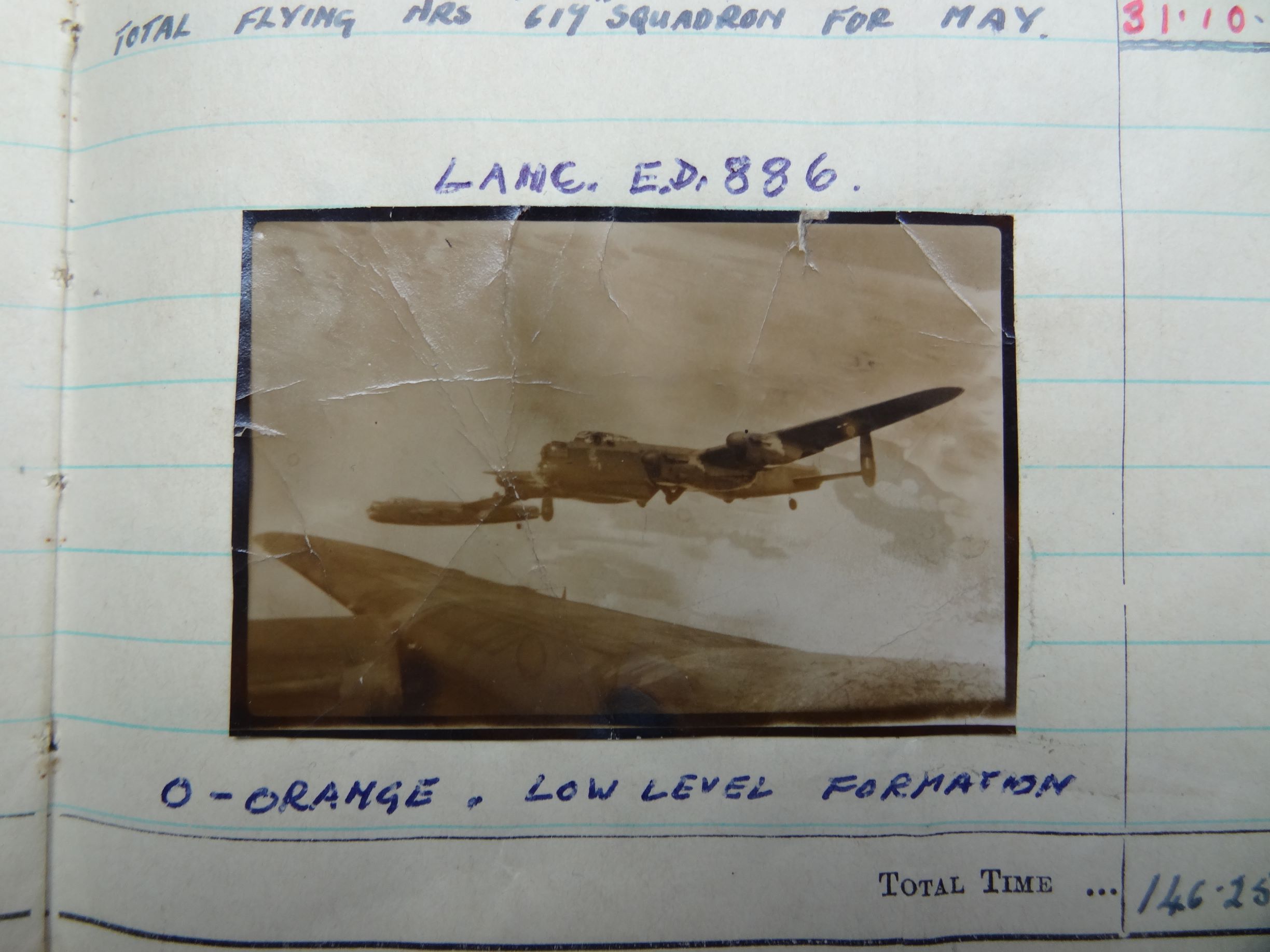 Once in the vicinity of the targets at 0226 hrs, AJ-O’s crew exchanged loud and excited chatter over the intercom as they saw ‘a great stream of water gushing from a breach in the dam and rolling down the valley below the wall.’ Howard reflected that it was ‘a horrifying, frightening sight’. Chalmers received a message from base that Eder Dam had also been breached by the preceding Lancasters, and that "O for Orange" was to divert to attack the Ennepe Dam.

Despite a course plotted by Howard, navigating from landmarks was now impossible and they encountered thick mist rising from the valleys. The bomb aimer, Franklin, reported seeing a reservoir below, but this was dismissed in turn by Howard: ‘Nonsense, there’s no lake here.’ Townsend dived even lower to get a picture and almost hit people clambering onto rooftops to escape the deluge.

All the crew had been given in briefing was a map that showed the Ennepe Reservoir to be an inverted ‘V’ shape with a small island about 300m from the dam wall. After circling several times, Townsend found the island to be more of an extended spit of land bisecting the ‘V’. However, the outline of a large mansion to starboard tallied with the briefing target. Chalmers started up the rapid rotation of the Dr Barnes Wallis's brainchild, the six-ton bouncing bomb, codenamed ‘Upkeep’. Howard was worried that the bomb could not possibly be aimed with the gyroscopic effect: ‘with the aircraft shaking horribly with six tons of bomb revolving underneath I had to guide Bill to the correct height with the two spotlights’. Anxious moments followed as Townsend made four painstaking runs before the bomb aimer was satisfied. AJ-O’s bouncing bomb was released at 0337 hrs. It skipped twice before exploding, sending a huge plume of water and dirt skywards. As Townsend lifted the Lancaster over first the dam and then a hill, it became apparent that the weapon had detonated correctly, but failed to destroy the target. Chalmers signalled the ‘Goner’ codeword to base, and reported that the mine had exploded 50 yards short of the concrete. An official report would later add: ‘contact believed, as ripples seen against dam.’

On the return flight, again made at treetop level, two more Lancasters were lost. Maudslay’s famously stricken “Z For Zebra” was downed by flak near Netterden, and Young's "A for Apple" was also shot down north of Ijmuiden, crashing just off the coast and into the North Sea. All aircraft flew very low, often hopping to avoid the power lines that had downed two on the outbound flight. Townsend had never flown at this height before, even in during the Gibson-led training and his recollections distilled to a series of silhouetted waving figures suddenly diving flat. 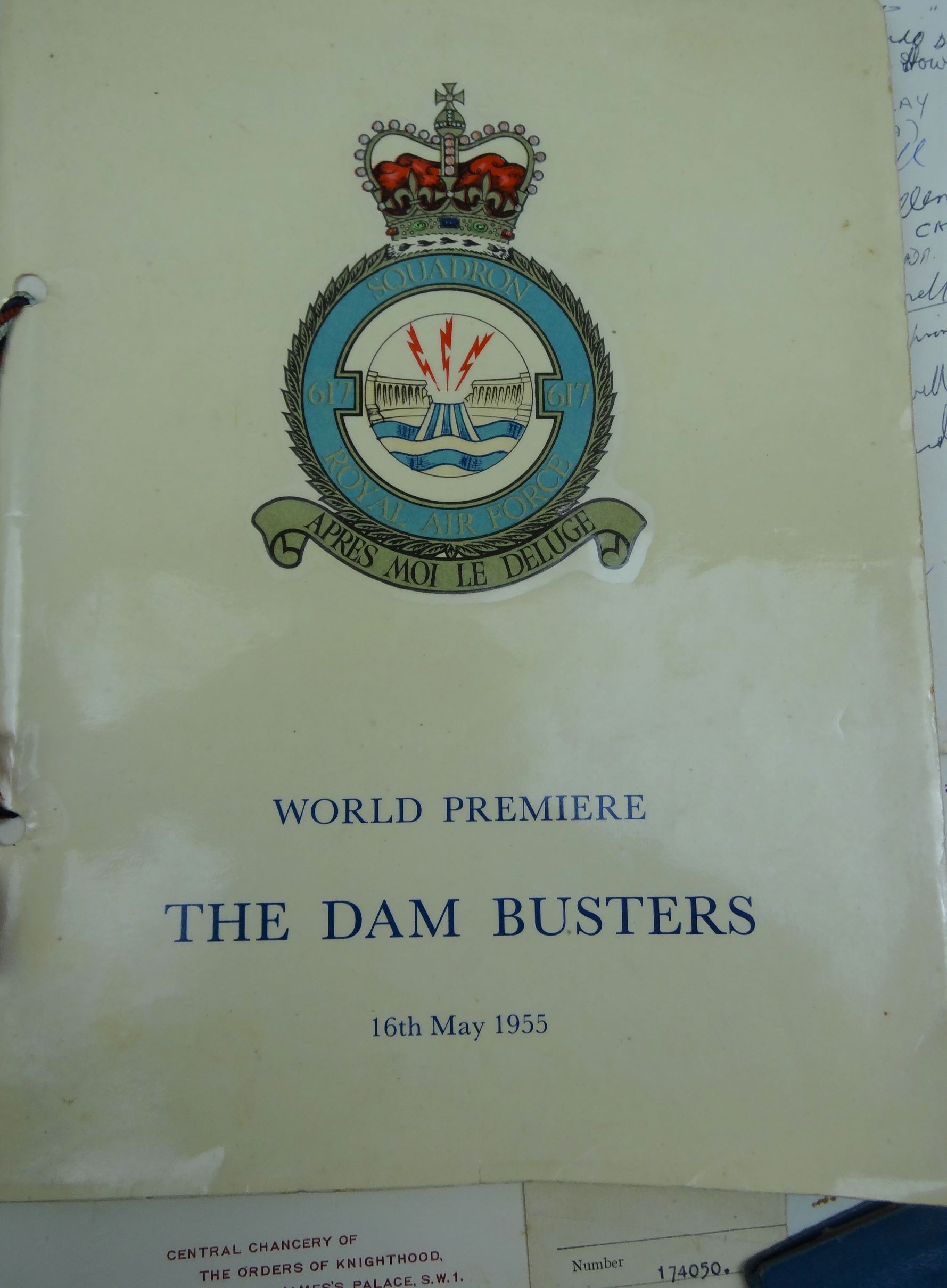 With the first rays of sun rising in the eastern sky, AJ-O became naked to the threat of night fighters. The Flight Engineer hit maximum thrust in the hurry home and ‘many a last minute hop’ was necessary to vault over high tension power lines. By sunrise they were near Texel, one of the Friesian Islands off the Dutch coast, and Howard recalled ‘seeing a miasma of gunfire rising from the ground, looking like all the evil in the world manifesting itself.’ Finally flying over water beyond the coast didn’t provide sudden respite, as, in an extreme effort to shoot down the Lancaster, one enemy anti-aircraft crew aimed its gun so low the crew noticed the shells bouncing off the surface of the sea and over the top of the aircraft, a tactic described by Howard as “hardly cricket”. Nevertheless, Chalmers was adamant that ‘flying so low saved our bacon.’ Then, over the North Sea, Townsend decided that one of the bomber's four engines was misbehaving and shut it down. Unable to use ‘Identification Friend or Foe’ equipment on AJ-O, the shore-based radar believed their Lancaster to be two Heinkels and a squadron of Spitfires was scrambled to intercept. A throng of 617 top brass had assembled to see AJ-O approaching Scampton and Townsend, peering through an oil-smattered windscreen, demonstrated his dislike of grass runways by bouncing the aircraft ‘an awful number of times – it seemed like twenty-four.’ AJ-O came to rest, on three engines, at 6.15 am, the last of the raid's surviving Lancasters to make it home.

As he came down the ladder, Townsend was asked how it had gone. By now exhausted, the pilot failed to notice that his interrogator was Air Chief Marshal Sir Arthur "Bomber" Harris, the commander-in-chief, and brushed aside the great man with a brusque "wait until debriefing". Chalmers, meanwhile, astounded to be greeted on the airfield by a galaxy of top brass, shook hands heartily all round, and was delighted to be congratulated on the clarity of his Morse.

Six of the “O For Orange” crew were awarded gallantry medals, making them the second most decorated Dams Raid crew after Guy Gibson’s “G For George”. Rear Gunner Ray Wilkinson, Font Gunner Doug Webb and Wireless Operator, George Chalmers, were all awarded the Distinguished Flying Medal, with Bomb Aimer Charles Franklin the second award clasp to the same medal. Navigator Lance Howard was awarded the Distinguished Flying Cross and Bill Townsend the Conspicuous Gallantry Medal for their roles. Of the 18 aircraft that had set out, only 8 had returned safely.

Subsequent myth surrounding “O For Orange” suggests that Townsend attacked the wrong dam. He had reported difficulty in finding his dam in the fog, and in his post-raid report he complained that the map of the Ennepe Dam was incorrect. The Bever Dam was located only about 5 miles southwest of the Ennepe Dam, and its reservoir had a similar topography. Bever was on the southern edge of the reservoir whilst Ennepe was situated on the northern edge. With the foggy mists filling the valleys during the early morning hours, Townsend was supposed to have mistaken the two lakes. The War Diary of the German Naval Staff reported that the Bever Dam had been attacked at nearly the same time as the Sorpe Dam. In addition, the Wupperverband authority responsible for the Bever Dam is said to have recovered the remains of a "mine" and those by the Ennepe waterside claimed that only a single bomb fell during WWII in their vicinity and that this was on land beyond the dam. Paul Keiser, a 19-year-old soldier on leave at his home close to the Bever Dam, also reported a bomber making several approaches to the dam and then dropping a bomb that caused a large explosion and a great pillar of flame. The manor house seen on the starboard side is consistent with both dams. Overhead maps of both a very similar, with a jutting spit of land interfering with a direct bomb run at the dam wall. 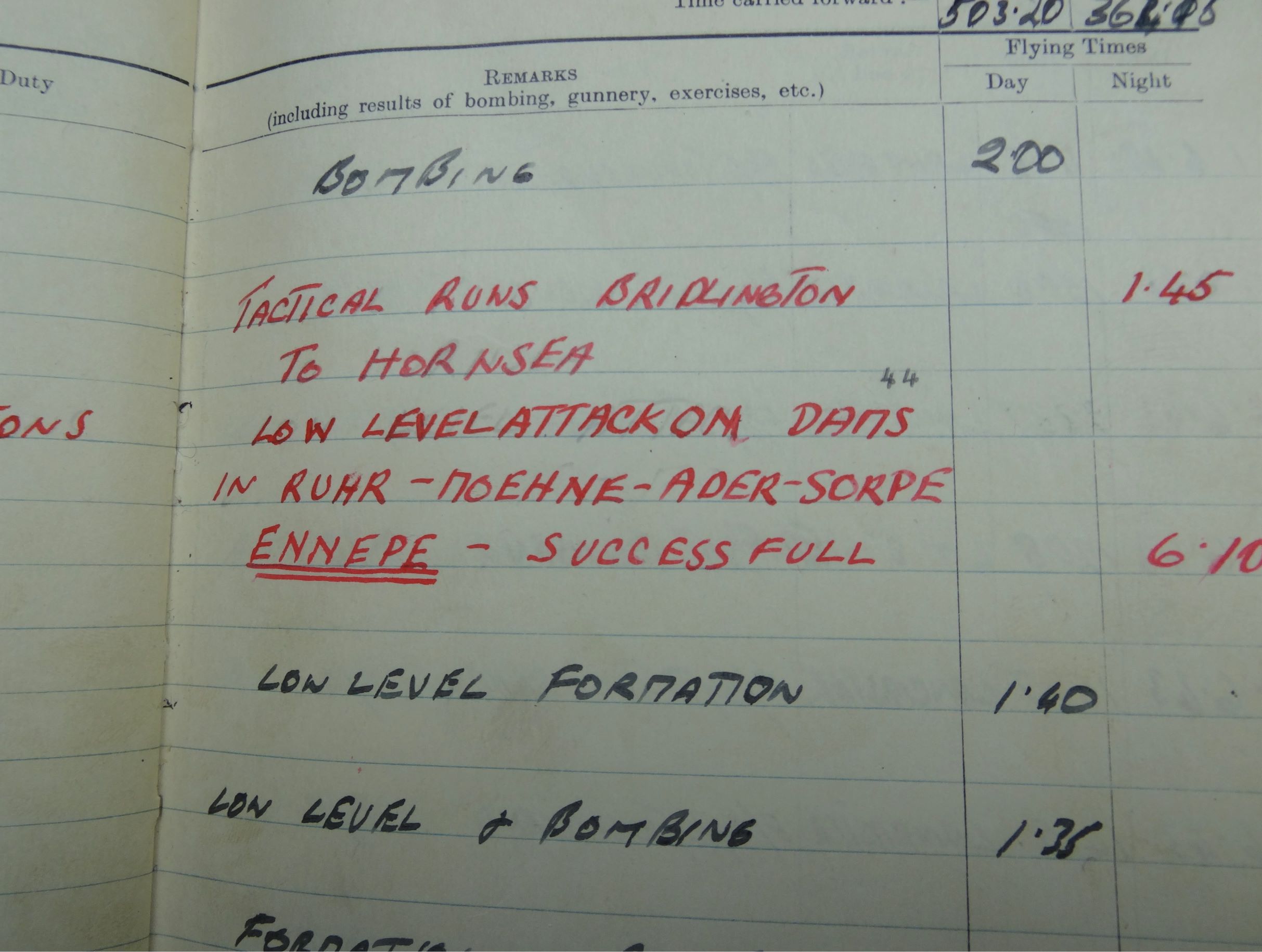 Perhaps the telling evidence is in the use of the name ‘Schwelme Dam’ to substitute Ennepe in all post-operational reports. Schwelme is a small town equidistant between both dams. The shadowy ‘Schwelme Dam’ didn’t really exist, but nonetheless appeared in all British press and radio reports, and was a description of any dam located near to the town and not instantly refutable by the Germans. Townsend remained steadfast that they attacked the dam presented to them in briefing. What could not be doubt was the extreme bravery of all of AJ-Os crew for going to such extremes to find the target in the mists. Another of their wave turned back to arrive at Scampton with its bomb-load fully intact after becoming disorientated.

“O” for “Orange” made five bomb runs in total, to give their aimer the best chance of success. All this was in the knowledge that it would soon be getting light and that their return to base would be virtually impossible. Indeed, Sgt. Kraft’s ‘specially scrambled’ Messerschmitt Bf 110 was only denied its prey by Townsend doubling back on himself after meeting heavy flak over Texel. With disappointment, he observed: ‘The fact that this last aircraft was at low level and had changed its course from west to north-west probably saved it from being shot down.’

One of the squadron's photo-reconnaissance Spitfires, piloted by Flying Officer Frank "Jerry" Fray was sent out to assess the impact of the raid. He took off from RAF Benson at 0730 hours and arrived over the Ruhr River immediately after first light. Photos were taken of the breached dams and the huge floods. Fray later described the experience: 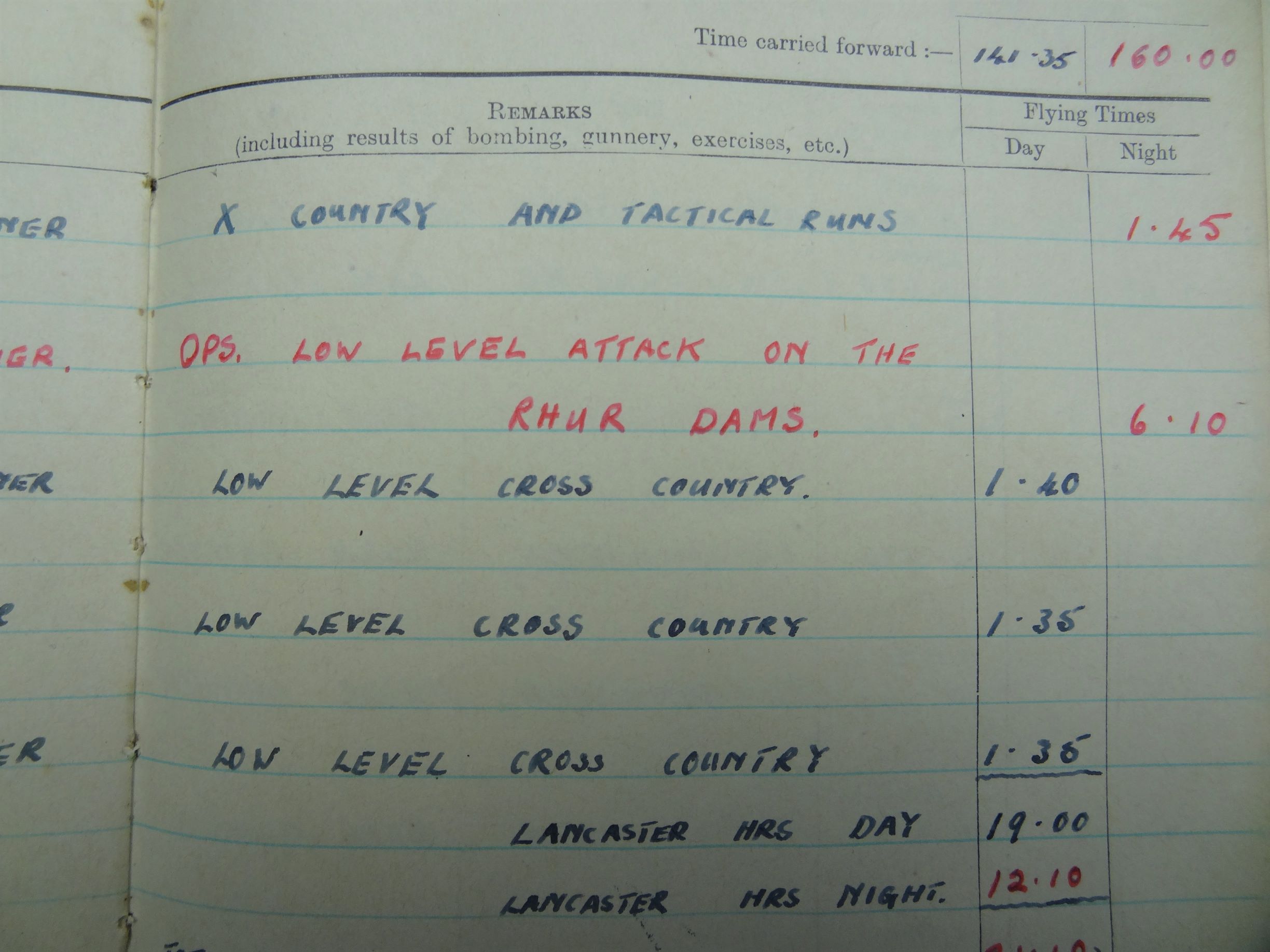 “When I was about 150 miles from the Möhne Dam, I could see the industrial haze over the Ruhr area and what appeared to be a cloud to the east. On flying closer, I saw that what had seemed to be cloud was actually the sun shining on the floodwaters. I looked down into the deep valley which had seemed so peaceful three days before, but now it was a wide torrent. The whole valley of the river was inundated with only patches of high ground and the tops of trees and church steeples showing above the flood. I was overcome by the immensity of it.”

Douglas Bader, who was a P.O.W. in Germany at the time of the raid recollects: “I well remember the destruction of the Mohne and Eder dams while I was in a prison camp. It had an enormous effect on the Germans and the opposite effect, of course, on us, the prisoners of war"