The Augsburg raid was one of the most daring in Bomber Command history, second in reputation and renown only to the Dambusters. It may have had a higher degree of difficulty than the dams raid, particularly given that the low level sortie was undertaken in broad daylight. 44 Squadron had been given a Christmas present on 24 Dec 1941: the new Avro Lancaster was delivered, with long-range Rolls Royce Merlin engines and high bomb-load capabilities. Bomber Command devised a plan that the new Lancaster could cross the English Channel at a weak point and penetrate deep inland towards a target. Operation Margin was devised to attack the MAN Diesel Factory at Augsburg, Bavaria; a major producer of diesel engines for German U-boats. 6 aircraft were provided from both 44 Squadron and 97 Squadron to fly in ‘vic’ formations led by Sqn. Ldr. John Nettleton and John Sherwood, respectively.

Both squadrons proceeded to the rendezvous point at Selsey Bill on the afternoon of 17 Apr 1942, crossing the Channel and descending to below 50 feet. The rear vic of 44 Squadron’s formation flew too close to a Luftwaffe airfield at Beamont-le-Roger and were spotted by German fighters that were coming in to land. They retracted their landing gear and arced around to intercept the bombers, attacking Joe Beckett’s plane and turning it into a ball of flames that fell away into the trees. Hubert Crum’s fuselage was severed and two gunners wounded and fire on one wing and he was forced to jettison his bombs and crash-land. Nick Sandford flew under electricity wire in an attempt to lose the hunters, but his aircraft exploded in mid-air. Both port engines of “Dusty” Rhodes’s Lancaster were on fire, causing it to rear up and crash with the loss of all crew. Nettleton and Garwell managed to fly on for Augsburg and were the first to start their bombing runs. Nettleton’s load was released and Garwell followed but was hit by flak and crashed. 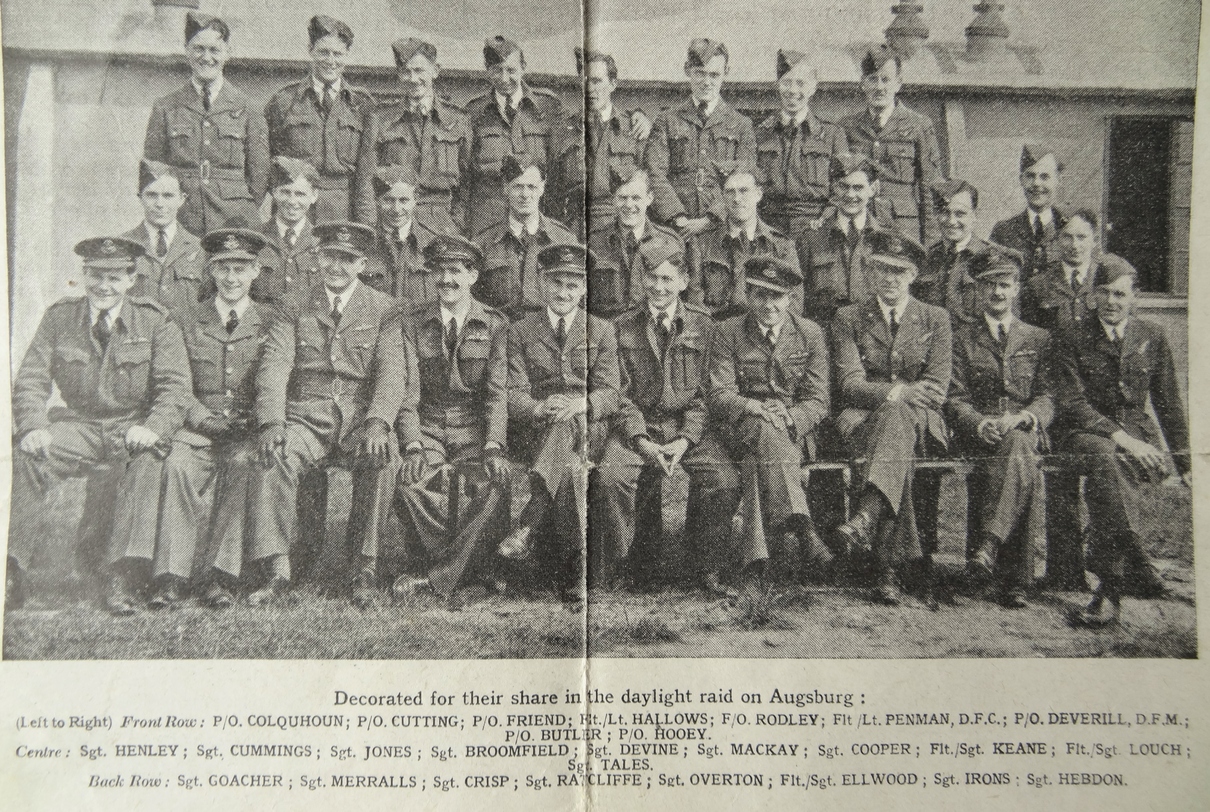 The formation of 97 Squadron was also devastated. John Sherwood’s lead craft was hit after bombing and crashed in what was described as a ‘flaming chrysanthemum.’ Somehow, he miraculously survived to become a P.O.W. Tom Mycroft’s plane was hit in the front turret and then the port wing. They continued their run and bombed, then the stricken aircraft plunged into the earth. 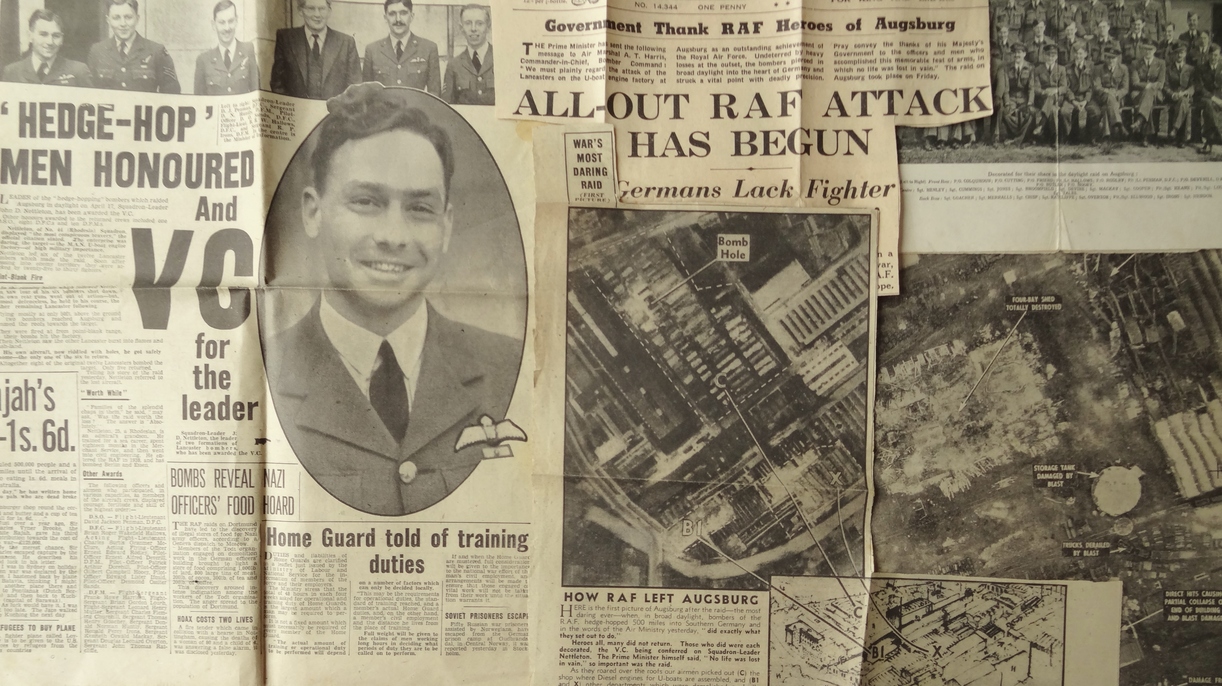 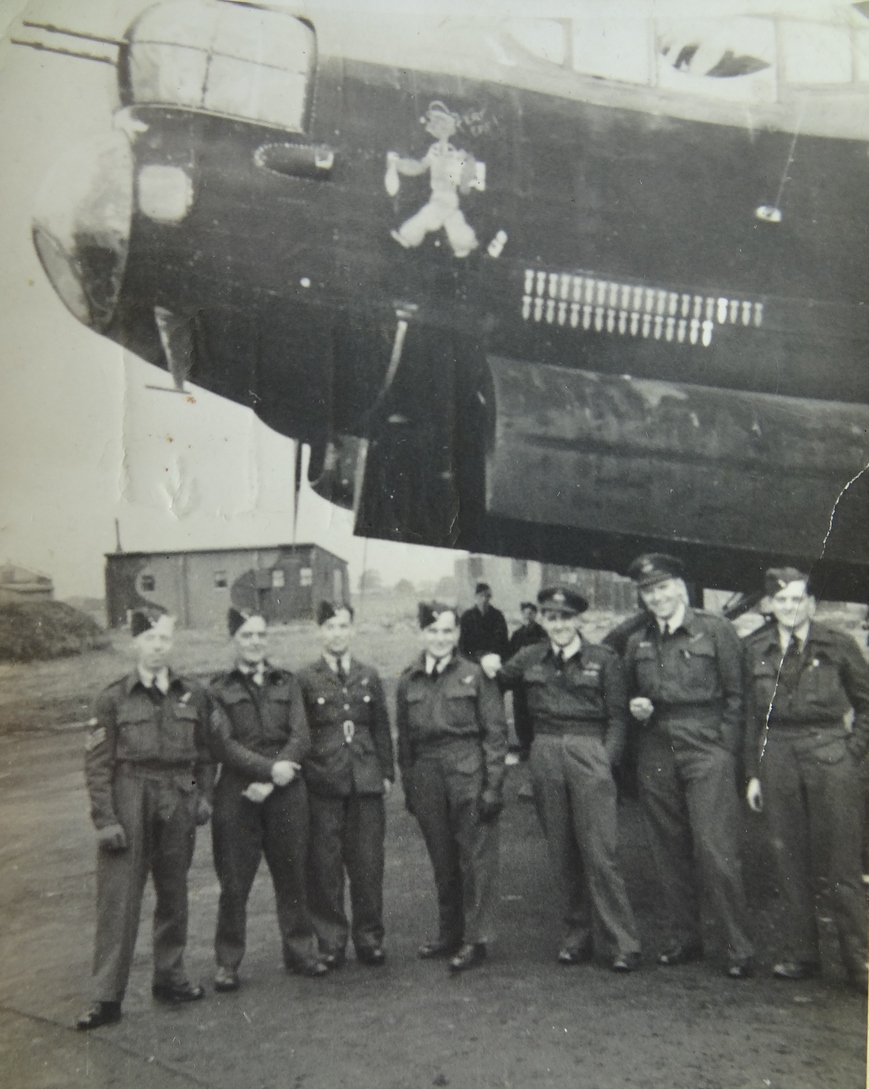 Ernest “The Devil” Deverill’s aircraft was hit in several places – it had lost a port engine, the hydraulic pipes had ruptured and the gun turrets put out of action. A large hole in the fuselage was burning after the hydraulic oil had been set alight. Still, Deverill managed to return home and deliver this report: ‘Target attacked in formation. No cloud, from 400 feet bombs were dropped on target area. No 3 ‘P’ was seen to catch fire in the air and crash. Very heavy flak and light predicted flak and S.A tracer. Aircraft caught fire on starboard side of fuselage and bomb bay but was extinguished by the efforts of the Wireless Operator and Mid gunner. Both mid and rear turrets u/s from target. Port outer engine was u/s and feathered on leaving but was restarted before reaching coast. Formated again on No 1 ‘U’ for protection and landed base.’

Nettleton received the V.C. and Penman the D.S.O. Eight D.F.C.s and ten D.F.M.s were awarded.

“We must plainly regard the attack of the Lancasters on the U-boat engine factory at Augsburg as an outstanding achievement of the Royal Air Force. Undeterred by heavy losses at the outset, 44 and 97 Squadrons pierced and struck a vital point with deadly precision in broad daylight. Pray convey the thanks of His Majesty’s Government to the officers and men who accomplished this memorial feat of arms in which no life was lost in vain.”

Buy the medals of Squadron Leader Ernest "The Devil" Deverill.