Major Loss at Loos: the terrors of taking command of a beaten Battalion

Major Charles Burrard was a seasoned veteran of the India campaign at the turn of the 20th century, but nothing could have prepared him for the horrors of his battalion's first major action of WWI. During the 9th Royal Welsh Fusiliers disastrous attack on Pietre at the Battle of Loos on Sep 25th 1915, Lt. Col. Madocks was shot through the head by a sniper and Burrard found himself in command of the Battalion. The following account of the fateful day is taken direct from his War Diary entries:

25th September 1915 4:25 am: I met the C.O., Lt. Col. MADOCKS in A company mess at 4.15 a.m. & had some coffee. I then went back to my dug-out. It was still drizzling & what breeze there was seemed to be unfavourable for the use of gas; I began to think the attack would be postponed.

5.50 am. Our artillery started a furious bombardment. I hurried down to the firing line and found the smoke candles at work. On my way there, I observed a mile to the south, a thin cloud floating slowly toward the German lines; this I took as asphyxiating gas. The breeze was still very slight but seemed to have turned temporarily in our favour. It was not to be depended on however & too weak - I am of the opinion that the pall of smoke in front of our lines did more harm than good as it brought on inactivity on the part of our Artillery. The smoke was intended to supplement the gas & mislead the Hun into believing that there was an immense amount of that commodity coming towards them. None of our men were injured by our own gas, though I believe a few of the 6th Wilts suffered.

6.30 a.m. About this time I was informed that a sheaf of rockets had been sent up by the Brigade, intimating the commencement of the attack. I personally did not see it. From subsequent inquiry I learnt the following which bore out to some extent the message sent by the Artillery Observation Officer at 6.25 that the Royal Welch were already attacking. Col. Madocks remained at A company mess till the sheaf of rockets went up, he then told Captain HOYLE, commanding A company to commence the attack (A company was to be directing).

The order had been issued to be ready to commence the attack at 6.30 a.m. This order might be differently interpreted. It should have been made clear whether troops were to enter the sap or remain behind the parapet till 6.30 a.m. The leading platoon of A company being extended in front of the sap it is possible an advance was made before Capt HOYLE returned from HdQuarters. At any rate an officer of B company on the left whose company was keeping in touch with A looked at his watch when the advance commenced and it was 6.20 a.m. 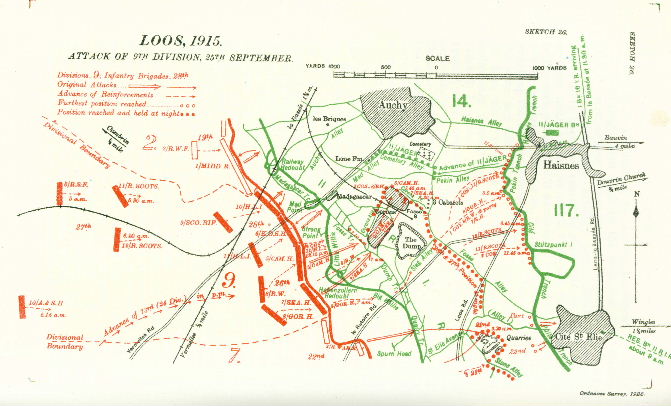 The pall of smoke was very thick; Capt HOYLE had orders for his directing flank to march on a certain willow tree but this was now hidden from view & it is believed he diverged to the right in front of the 9th Welsh. The Artillery observation officer who had wired down that the attack had commenced, about this time surpassed himself by 'phoning that the 9th R.W. Fus. had taken the first line of trenches. This must have been an effort of the imagination on his part as owing to the smoke, nothing could be seen. Messages like this led to wild rumours after the action of spies having tapped the wires.

At about 6.50 I met Lt. Col. Madocks & his Adjutant in one of the centre bays. He seemed very optimistic and asked me if D company was out yet; if so, we would follow. I reported that D company was not yet out. A quarter of an hour later Captain HOGG the Adjutant again went to inquire & in the meantime Col. MADOCKS who was observing over the parapet was struck by a shot in the temple & fell dead at my feet. It was evident by this time that things were not going well; not much could be seen on account of the smoke but there were rumours of the saps being encumbered with wounded which accounted for the delay with D company. – I had seen Capt. ACTON, comdg D company a few minutes before just outside our wire entanglement & I suggested to Capt. HOGG to get into communication with him & obtain his opinion; Capt. HOGG had been gone about 10 minutes when I received information that both he and Capt. ACTON had been shot.

The 6th Wilts were now beginning to arrive; to avoid a useless sacrifice of life I gave orders for a retirement. Col. JEFFRIES, comdg 6th Wilts. who arrived shortly afterwards concurred with me.

Our action north of the LA BASSEE canal was intended as a demonstration, the principle attack being carried out south of the canal; our energetic action was the means of withdrawing several battalions of reserve to our front, which the Germans could have utilised further south. But could not this advantage have been gained without such loss of life? Undoubtedly both the G.O.C. 58th Brigade & Col. MADOCKS had been misled as to the damage our Artillery had effected on the enemy's wire after several day's bombardment also the effect it had had on the enemy's morale; the effect on the wire was, as a matter of fact, negligible & the onus of not reporting this, of not making a more thorough reconnaissance rests on the companies who were in the front line; it was unduly optimistic to suppose that the enemy's morale had gone, as during a bombardment the Germans are adept at burrowing themselves into specially deep dug-outs or keeping out of the way.

It was confidently believed that we should have no difficulty in rushing across the intervening space & capturing the German front & support trenches. When the time came to carry this out we found ourselves up against a row of impenetrable wire and the intervening ground swept by half-a-dozen a machine guns. C company under Capt. NICHOLL had been detailed to act as a flanking party & moved up FIFE ROAD. They suffered severely from the enemy's artillery which was most accurate. The remainder of the morning was taken up in moving the remnants of the battalion to the Reserve Line. During the hours of darkness many of the wounded were brought in.

Total casualties officers and men 249. It is believed a few of the missing are prisoners of war. The numbers that went into action were:
25 officers, 781 rank & file