William Yates flew in Sunderland Flying Boats, hunting submarines and evacuating 'VIPs' from secret locations. His remarkable story starts right at the outset of WWII war in 1939 and peaks with the daring rescue from Tivot Bay on the day the Yugoslav Army surrendered. His Sunderland then fatefully engaged an Italian submarine off Tobruk and was shot down with eight of his colleagues killed. He was one of five men fished out of the water and made POW at Sulmona. In 1943 he led an escape, only to be recaptured by the Germans. This is his account of the sea/air evacuation mission at Tivot Bay:

"At 10:00hrs on 16th April 1941, we the crew of Sunderland Flying Boat NM-U, flew from Scaramangi in Greece . The mission was to evacuate British and Yugoslav diplomats (VIPs) from Kotor, Montenegro amidst the German advance there."

"We would maintain strict alert, keeping a sharp lookout for enemy aircraft between the heel of Italy and the Albanian coast. All guns were to be manned; the front and midships guns were all Vickers 'K' types and the rear equipped with four Browning 303s. I took a starboard Vickers."

"We touched down on the Adriatic at 17:00hrs. There were no signs of the VIP boats. We continued to the next bay, not knowing what lay ahead. We passed an island on our port side on which stood an abbey, partially hidden amongst some cypress trees. I picked up my camera and snapped, learning later that it was the famous island of St George – the island of the dead with the old Benedictine monastery," (pictured)

"Suddenly there was a roar overhead, it was a twin-engine Dornia of the Yugoslavian Air Force. I breathed a sigh of relief. Then we saw a boat making headway towards our bows and I directed it to the port entrance door, warning people of the outward propellers. An RAF Wing Commander stepped aboard and introduced himself as leader of the evacuation. Twenty-two VIPs embarked, some carrying briefcases. Other boats appeared with people looking up at me imploringly. There were two Yugolsav Naval Air Force officers beseeching us to take them on board. We took them in. At the same time, loud noises started to emanate from the mountain roads toward Kotor. It was the unmistakable sound of military vehicles and gunfire."

"A padre and his wife sat down whilst the last two VIPs embarked – one badly injured with his head and arm bandaged, the other an excitable RAF pilot patting backs and shaking hands. We prepared for take-off as the Wing Commander returned to the boat one last time and as the noise of the vehicle column became louder. One VIP remarked 'I think the Jerries are getting close'. My other gunner became a bit panicky and exclaimed 'For Christ's sake – let's get out of here'. The padre's wife asked what was happening. I tried to take their minds off it by asking how they came to be passengers. He explained that he was the British padre of a small church and he and his wife had been showing anti-German propaganda films. He added that they were both on the German Hit List."

"The exited RAF pilot told us how he had been in operations over Greece when his plane was hit. He parachuted out, floating into Albania from where he made his way into Yugoslavia. He was so thankful and exclaimed: 'What can I give you? What can I give you?' We were surprised and declined, but he insisted 'No, I must give you something. He dug his hands in his pockets and pulled out a large Dinar note.' This is all I have, please take it.' We again refused, but he pushed it into my colleague's hand." 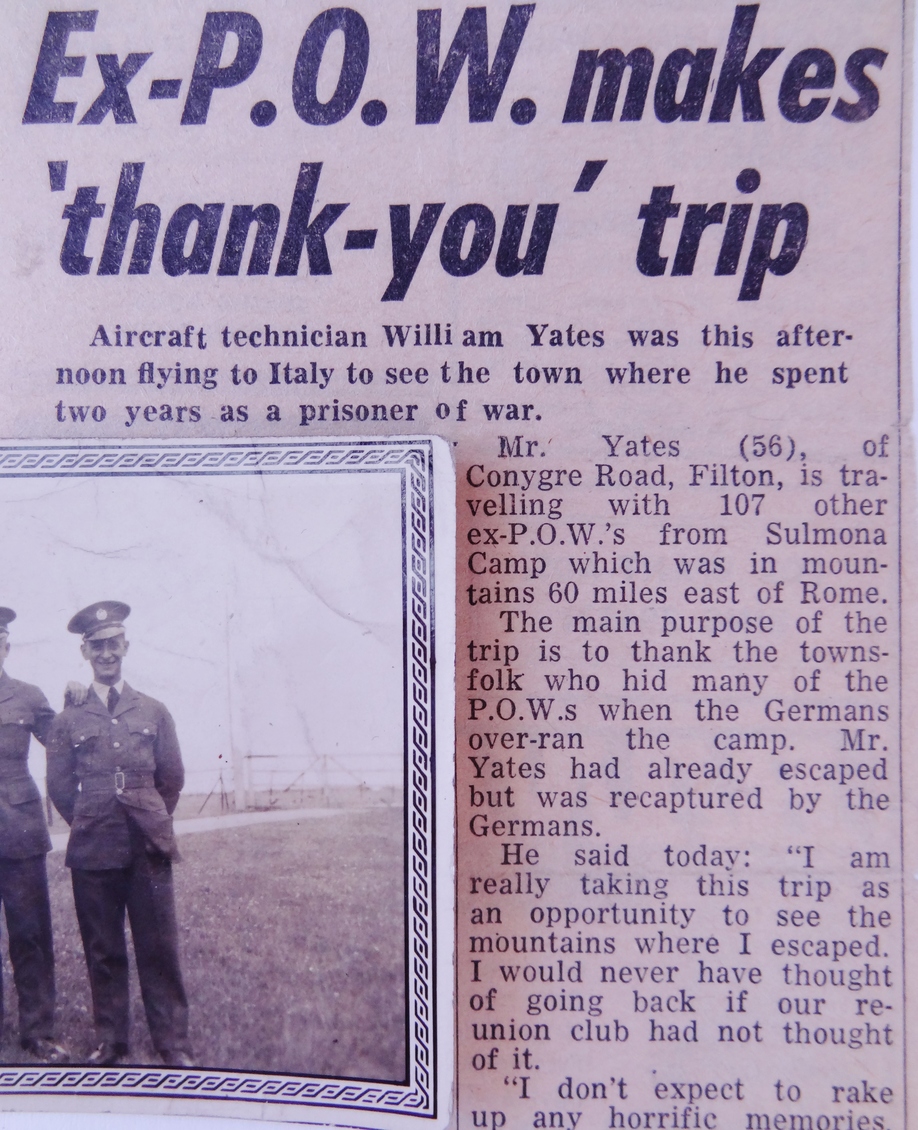 Then the Wing Commander returned, but his expression was serious and business-like. He instructed us to switch off the engines at once and lay anchor. 'We cannot leave today' he said impassively. He called us in with the skipper, out of earshot of the VIPs. He explained that the call had been made that we would be safer here and that if we tried to return to base that night, we would be shot down. The Germans had got wind of the situation and were looking to catch sight of a Sunderland over the Strait of Ottanto. We lay down together for a short, sleepless night."

"At dawn's first crack, the Wing Commander waved everyone goodbye and got off to leave. We couldn't believe what he was doing, questioning why he wouldn't evacuate with us. I will never forget his reply:

'I have to remain here. It is my duty. Tomorrow I shall be eating sausage and sauerkraut.'

With this he saluted and stepped back onto his small boat. It was 04:15hrs when we throttled the four Pegasus XXII engines to full and the Sunderland barged its way through choppy waters to finally lift off – we were soon flying over the Adriatic. It was two hours after departure when the skipper called me to the bridge whereupon, to my surprise, he directed me to occupy his empty seat and ordered: 'F

ly it.' With some trepidation I took over and concentrated on the artificial horizon and compass. After a few minutes, the skipper resumed the controls and said 'OK, but watch the altimeter next time or you might fly into the sea.' At first I was confused, but then realised that, if attacked over the Strait of Ottanto and the flying crew immobilised, I would be depended on to fly the boat."

The Sunderland Flying Boat, NM-U, returned safely to base at Scaramangi where its cargo of VIPs disembarked. It was the 17th April 1941; the day the Yugoslav Royal Army surrendered to the Germans.

Just months later, on 01 Aug 1941, Yates' Sunderland was shot down by an Italian submarine off Tobruk. 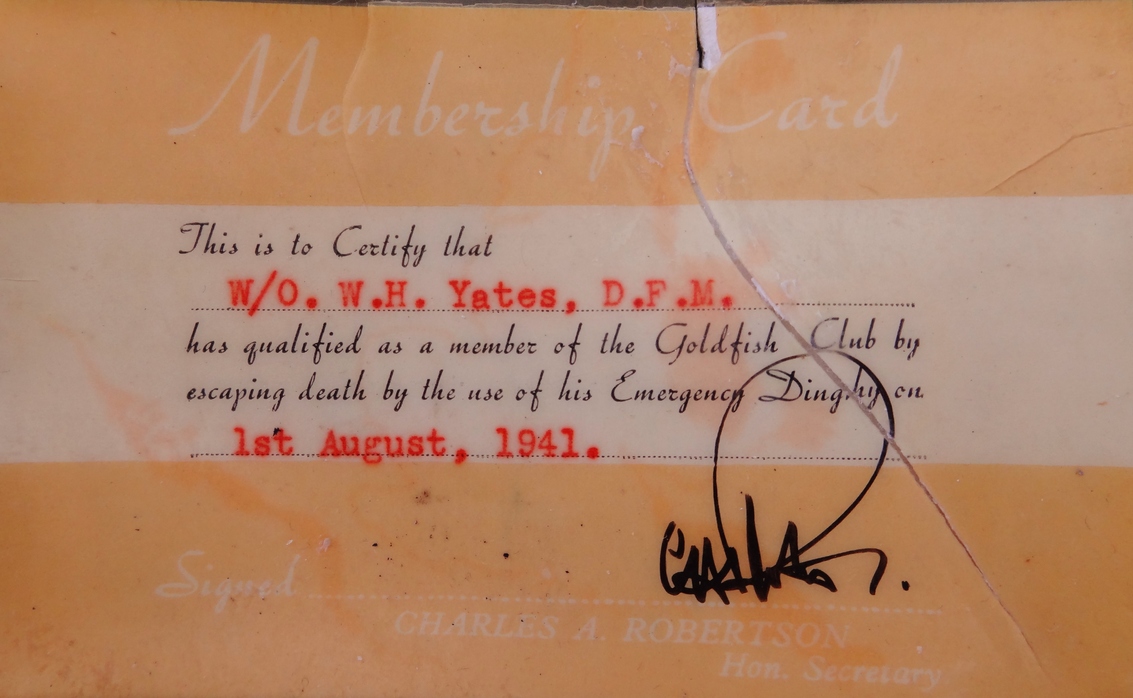 Eight crew members were killed and Yates was one of five others fished out of the water (in the process made exclusive member of the 'Goldfish Club' and made POW. He wrote:

"As a POW, I led an escape in 1943 with Corporal Neil of the R.A.S.C., from a train's cattle truck at Udine, Northern Italy. I believe the Corporal's home was at Balloch and his family were in the haulage business. Maybe it IS a small world!"

Yates was later recaptured and spent the remainder of the war in German camps.