H.M.S. E14 was an early British submarine launched into the water in 1914. Few could have foreseen the fortunes and disasters set for those thirty men on board. By sinking ships ten times its size in the sea of Marmora, it would return to friendly shores amidst a fanfare, with the Victoria Cross bestowed upon its Captain and gallantry medals for all the crew. The next Captain would be awarded the same accolade, but there would be no chest to pin it on – for his last words were 'We are in the hands of God' as he piloted the stricken and surfaced submarine under a hail of shell fire.

A cunning part of the Gallipoli campaign plan was to send submarines into the mythically perilous seas around the Dardanelles. E14 safely negotiated the heavily mined and netted stretch of water to enter the Sea of Marmara on 29th April 1915. She remained there for the next seventy days wreaking havoc amongst Turkish shipping, sinking gunboats and troop transports, including the 5000 tonne Guj-Djemel steamer carrying 6000 troops and an entire battery of artillery to Gallipoli. 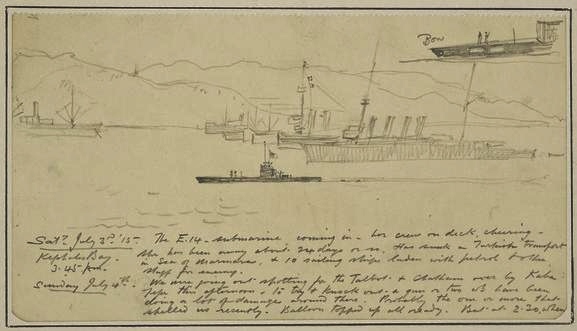 These incredible extracts are taken from a diary account belonging to Lt. Comm. Edward Boyle, V.C. who captained E14 during the Gallipoli campaign:

"I have the honour to submit the following report of H.M. Submarine E14 in the Sea of Marmara from 27th April to 18th May 1915.

"27th April 4.00am Suan Dere caught us with searchlight and opened fire, missing ahead. Dived to 90 feet under the minefield. Rose to 22 feet and passed Chanak, all the forts firing at me. There were a lot of small ships and steamboats patrolling and I saw one torpedo gunboat, which I fired at at range of 1600 yds. I just had time to see a large column of water as high as her mast rise from her quarter where she was hit, then I had to dip again as the men in a small steamboat were leaning over trying to catch hold of the top of my periscope." 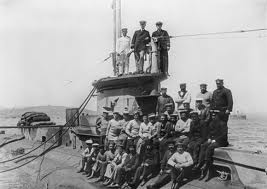 "29th April 1.15pm More smoke, 3 Destroyers convoying 2 troop ships. Unfortunately it was a glassy calm and the T.B.D.s sighted my periscope and opened fire while I was a good way off. I fired at one transport, but had to dip before I could see the effect of the shot. I heard a thud and the depth gauges flicked 10 feet. When I was able to put the periscope up about half an hour afterwards, I saw two destroyers and one ship proceeding on their original course and the remaining ship and destroyer making for the shore with dense columns of yellow smoke pouring from her. She was undoubtedly on fire, and probably sunk later, as we never saw her again."

"4th May 7:30pm Sighted a Destroyer convoying a transport. She was working very well, but I timed her and fired when she was the far side of the transport. Although it was flat calm we were unseen and the attack was perfect. The torpedo ran perfectly, hit the ship at right angles, and did not explode."

"10th May 6:00pm Proceeded towards Kalolimno Island. Sighted one T.B.D. and two transports. Attacked. The torpedo fired at the leading transport did not run straight and missed astern. The second hit the other transport and there was a terrific explosion. She was a two-funnelled ship and about twice as large as any other ship I saw there."

E14 ran amok in the Sea of Marmara in 1915, but she met her end under Lt. Cmdr. Geoffrey Saxton White in 1918 when, stricken and running out of air, she was forced to surface near painstakingly near to the entrance of Dardanelles. Fire rained down from both shorelines and E14 ran the gauntlet for nearly half an hour, coming within 600 yards of the entrance and safety.

"The Captain's last words were 'We are in the hands of God' and only a few seconds later I looked for him and saw his body mangled by shell fire, roll into the water and was taken under. The last shell hit the starboard saddle tank and exploded killing all, I believe. Previous to this we were running close to shore and I passed the order "Starboard 25" and she turned rapidly and sank in deep water. I wish to bring to your notice the gallantry of R Mitchell, A.B. and Signalman Trimble for going after Telegraphist Pritchard under heavy machine gun fire and also calibre weapons were still in action. These two saved his life, keeping him afloat until picked up by the Turks. The three wounded were sent to hospital at once, all the remainder had their clothing taken from them, only one man, Milburn ERA getting his clothes back. I think many more might have been saved if the Turks had come out directly after she had sunk. Now she is lying just off Kum Kale forts."

Buy the gallantry medal group of a Seaman aboard the E14.