Ships in the Ice: The Discovery, Terra Nova and Morning’s Antarctic Expeditions

The S.Y. Morning was relief ship to Scott's British National Antarctic Expedition. J.D. Morrison was her Chief Engineer, photographer and diarist. Here follows some of Morrison's first-hand accounts of events, taken from his personal log. It offers a very candid take on events at sea and ashore, including his colourful criticism of the state of the Shakleton's Terra Nova, and the bitter anger at the superior attitudes of the Royal Navy to officers of the Merchant Service. It sold at Bonhams for £9500.

The S.Y. Morning was relief ship to Scott's British National Antarctic Expedition. John Donald Morrison was her Chief Engineer, photographer and diarist. Here follows some of Morrison's first-hand accounts of events, taken from his personal log. It offers a very candid take on events at sea and ashore, including his colourful criticism of the state of the Shakleton's Terra Nova, and the bitter anger at the superior attitudes of the Royal Navy to officers of the Merchant Service. It sold at Bonhams for £9500.

Early entries note concerns with the engines and the ship's sailing qualities. Ten days out Morrison notes: 'She takes a little water on-board with the roll and has wet the Captain and Chief Officers rooms'.

Drunkenness was prevalent amongst those in the Engine Room, particularly in the case of the engine greaser, Taylor. During the long ensuing journey to Lyttleton (during which Morrison's ship's cat 'Bobs' was lost overboard), the log notes the routine of the engine room, repairs, the stopping and starting of the engines, as well as the lighter matters including days when photographs were developed, and the concert where Doorly sang 'Northland', to words of a sarcastic tone, composed by Morrison himself.

On 10 December 1902, after several days stowing stores in New Zealand, the ship's company were issued with Arctic clothing and boots. There was a sweepstake as to when ice would first be sighted, and Morrison starts to make regular entries on the birds observed. On Christmas Eve the officers had a concert with 'any amount of toasts and songs', and Morrison printed some photographs by the midnight sun.

The following day ice was sighted, together with an uncharted island which they named Scott Island. Captain Colbeck, Mulock and Morrison made the landing and drank various toasts including the health of friends in Lyttleton and Christchurch. The following day Morning had a nasty moment when she struck 'a ledge about 1 cable length form the south side of island'. Boats were provisioned and made ready, but Morrison put the engines full speed astern, and escaped with the loss of a 'good bit of our false keel'.

Famously, on 8 January 1903 Morrison was one of those to go ashore at Cape Adare to Borchgrevink's hut of 1899:

'Broke open the door of Hut, found record from Discovery saying all well had been there 7 January 1902...took off some snow shoes and things as momentos'.

Morrison was one of the party landing at Cape Crozier where Discovery's record was found with news that 'she was in winter quarters in McMurdo Bay about 100 miles from Cape Crozier so we may see her tomorrow'. However, it was not until 23 January that Discovery's topmasts were sighted:

'We fired rockets and I fancy the Discovery hoisted her flags but as she was about 5 miles away is was impossible to say'.

The following day sledges from Discovery were seen:
'The Doctor, Doorly and I went off to meet them but we fell through the ice near the ship. The Captain and 2nd Officer went off on ski and met the party...The Capt. and party have been away three months southwards. The Engineer and Armitage have explored the Western Mountains to the height of 9000ft.'

For a further week Morning steamed with limited success against the ice. On 3 February Discovery was 'dressed with flags', taken correctly as a sign that Scott had returned. 'Their dogs all died of poisoning the fish being bad'. Morrison and others from Morning went over to Discovery:

"Had a big dinner. I have never seen men eat so much. After dinner we had a concert".

Thereafter the Morning was either transferring stores to Discovery by sledge, or taking any advantage that offered to steam closer to Discovery, including the use of explosives. However, on 2 March Morning left for Lyttleton:

'We have taken on board Mr. Shackleton and nine men from the Discovery. Mr. Shackleton is suffering from the effects of his long sledge journey South the other men are more or less undesirables: Great cheering from all hands. It seemed a great pity leaving them there on the ice for winter'.

Getting clear of the ice was not easy and at one point Morrision confided that 'it certainly looked as if we were going to get stuck which would be a ghastly thing as most of our oils, candles and small stores have been sent to the Discovery'.

Morrison and the Morning later joined forces with another famous companion ship:

'Terra Nova arrived here on Saturday. Don't think much of her or her men. Nine of her crew in jail. Went ashore with Doctor in the afternoon most miserable place I was ever in and most extraordinary looking men and women, judging by the look of the place and people we'll be glad to get away from here, even South Victoria Land will be an improvement the penguins are more or less intelligent'.

On 5 January the ships were stopped 17 miles from Discovery:

'In the afternoon Capt. Scott and Dr. Wilson came on board quite unexpectedly. They have a small camp on the beach about 3 miles from here at a penguin rookery'.

By 15 January Royds told Morrison that in a couple of days Discovery would start sending her gear across. On the 15th they 'put a tent on the ice and began blasting - not very effective'. Ten days later with some assistance from blasting, Morning and Terra Nova were close to the islets marking the halfway point between where the ships had first been stopped and Discovery, and hopes were rising:
'We are nearly up to the first island now a day or two of this sort of swell would clear the strait and let Discovery out, but there were also complications and the following day the sledging party had to leave the sledges on the ice and jump from floe to floe. Eventually Terra Nova got up to the gear and got it on board'.

The early days of February were spent blasting with varied result, and on the 11th word was sent to Discovery for all hands that could be spared to assist in digging and blasting. On the morning of 12 February the condenser started leaking after a 'bad bump' and later in the day 'stuck an ice floe with sternway and the wheel span round damaging the wheel and box bruising the bosun badly'. Two days later 'the two ships were steaming neck and neck through the floes...we had a great race all the Discovery people sitting on Hut Point watching'.

On the 16th Discovery was clear and Terra Nova moved to coal her. Morrison thought he saw Discovery ashore on the 17th and the following day recorded 'Discovery had been ashore on Hut Point all yesterday afternoon the waves breaking over her, she was expected to break up every little while. A short lull and a shift of wind allowed her to get off...' Wind from the south then forced Morning against the ice, damaging her propeller, the entry for 19 February concluding: 'I never felt so pleased as when we got out of MacMurdo strait and hope never to get into it again'.

Morrison's anger at his treatment at the hands of the Royal Navy and by extension the Admiralty is a standout: 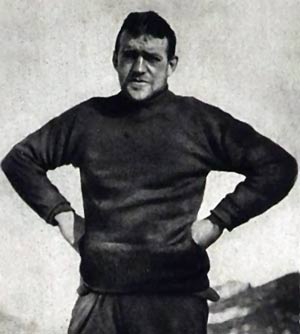 'The officers and Engineers of H.M.S. Phoebe who had never seen ice knew far more about what was wanted and what should or not be done to the ship to make her fit for a southern trip than we did. How we got out from London, down to the Discovery and back here was beyond their comprehension'.

As is his view of the accommodation on Terra Nova:

'It is simply disgraceful and the way she is found is a scandal. There was a great amount of either ignorance or worse displayed in fitting her out. Shackleton who is said to have looked after the equipment must have forgotten his own experiences in the south or been fearfully careless. Perhaps he wanted to break the record for cheapness and so get into the good graces of the Admiralty. A few shillings spent in buying crockery for the saloon and other little things go far to making a ship comfortable'.

Despite this, a personally inscribed sterling silver napkin ring from Ernest Shackleton to John Donald Morrison was gifted during his return voyage. This sold alongside Morrison's photographs at Christies in 2007, which hammered alone for £10,000.